The computer-based Decision Support System (DSS) MiCorr is a new non-invasive diagnostic tool for metal objects. Three search engines have been developed: the first one uses interlinked keywords, the second a decision chain to identify metal families and the third digital stratigraphies of corrosion forms. The latter, based on Bertholon’s schematic description of metal corrosion[1], is the most innovative tool of this application. Corrosion forms are described as structures of strata (metal, corroded metal, corrosion layers…), each stratum having its specific characteristics (morphology, microstructure, texture and other properties). A modelling program allows to build a corrosion structure from coded building blocks (strata containing up to 30 characteristics).

The same set of analytical techniques with similar operating conditions have been used to characterize the corrosion forms/case studies of the database. Some of them required the destructive sampling of artefacts to determine the precise nature, organization and composition of the corresponding strata. As they are characterized with the same digital construction model which is used for the corrosion forms under investigation a comparison becomes possible.

By comparing the corrosion form of an artefact under observation or a sample from the same artefact observed on cross-section with the database through the DSS, a MiCorr user is able to find case studies/corrosion forms of objects showing similar corrosion phenomena. In case the user is a conservation professional, this should help him.her to implement an appropriate conservation protocol.

The search engines allow the user to question the database but if registered he.she has also the possibility to enrich the database with new corrosion forms and/or case studies, thus becoming an active contributor. The basic format of the corrosion forms can be further improved with any additional analytical data and the operating conditions used.

In short, MiCorr aims to:

The didactic, self-learning and freely accessible and participatory MiCorr tool should enable the various scientific communities involved in the analysis and conservation of metals to better understand existing knowledge and contribute to unsolved research problems.

A thorough understanding of alteration processes developed on metals enables us to slow down, limit and / or stop existing corrosion. In the industrial field, sampling of metals to investigate the amount of alteration observed is not unusual and the information gained provide knowledge on the corrosion developed such as stress corrosion cracking, fatigue corrosion, corrosion due to exposure to high temperature or pressure which are rarely encountered in the heritage domain. If this type of alteration does appear on historic or archaeological artefacts, it will not necessarily be similar due to the long periods of stress or alteration involved. Therefore, the examination of contemporary metals cannot solely be used to predict the long-term preservation of materials (Neff 2006[2]).

When conserving metal artefacts, conservation professionals try to carry out the most precise diagnosis in order to find an appropriate conservation treatment. This diagnosis requires a thorough description of the surface condition of the object under investigation. Based on experience and consultation of corrosion forms published in the literature (Corrosion Science, Studies in Conservation, Journal of Cultural Heritage, etc.), conservation professionals try to find analogies with the observed corrosion forms. On the basis of this knowledge conservation strategies can be proposed.

But the matching between the corrosion forms investigated and those that are used for comparison is difficult to achieve. This is due to the lack of standardization in the description of the object surfaces (according to his/her experience, each conservator perceives the object in a different way) and the heterogeneity of heritage metal surfaces. The use of different analytical tools can bring further bias in the description of corrosion forms.

The professional associations of corrosion experts (NACE - the Professional society for corrosion engineers since 1943 and the European Corrosion Federation since 1955) have published numerous books on metal corrosion. Although the corrosion mechanisms under particular environmental conditions (and the means to prevent it) are known, there are no online diagnostic tools to link observed alterations to the causes of corrosion. Websites such as http://corrosion-doctors.org/Contents.htm provide illustrations of corrosion forms. Unlike heritage metals which show extensive and complex corrosion forms, such as active or reactivated corrosion, they only show the result of the reactivity of the clean metal in a corrosive environment. In the conservation domain, only one database (www.materialspathology.com) existed in the past but is no longer available. It offered descriptions of corrosion forms encountered on heritage metals, but did not provide a diagnosis.

Over the years, much research on the diagnosis of corroded heritage metals has been carried out and regularly published: Dillmann and his team (Dillmann 2005[3]) have been investigating the alterations of archaeological and historic iron ; Robbiola (Robbiola 1998[4]) has focused on the study of natural patinas on copper-based alloys and how they undergo changes when buried in a chlorinated soil that favours active corrosion ; Turgoose (Turgoose 1985[5]) has investigated alterations of lead artefacts in organic acid-rich environments, such as those found in museum display cases and storage cabinets. The outcome of all this research is dispersed in the literature due to the different backgrounds of the researchers involved (corrosion scientists, archaeometers, conservation scientists) as well as the audience to which the publications are addressed to (industry, engineering, conservation of cultural heritage).

Most of this research is based on the study of samples taken from the core of the metal under investigation. Until the research of Bertholon on the visual description of corrosion products and their structure (Bertholon 20011 [6]), it was impossible to adequately describe corrosion phenomena in a standardized way and refer then to existing models. Some conservation training programmes such as at HE-Arc CR, are trying to implement this method to diagnose alterations observed on both studied and unstudied heritage metals. MiCorr is the logical continuation of these efforts that will allow a broader community to adopt this methodology and improve their diagnosis on heritage metals.

The research methodology of MiCorr follows the steps of a conservation project. It starts with the visual observation of the altered object, continues with the diagnosis and ends with the proposal of conservation treatments. Figure 1 illustrates these 3 steps: 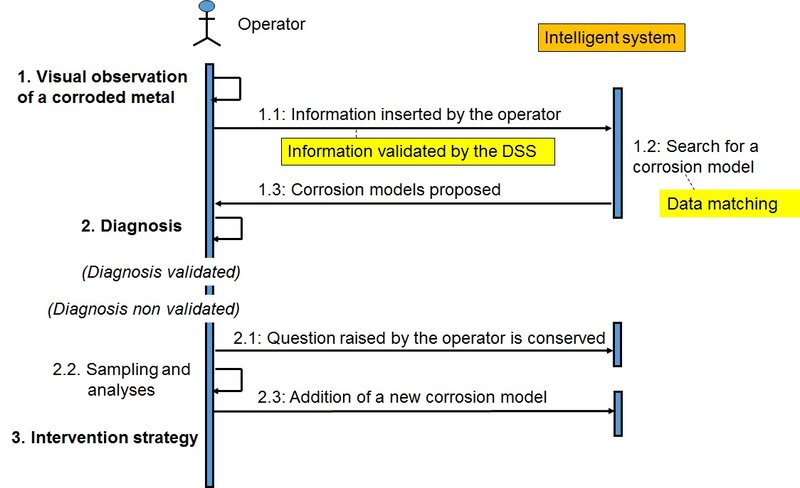