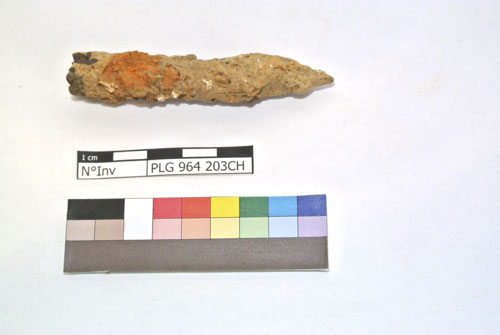 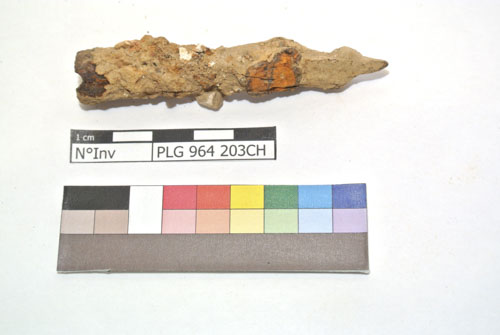 The arrowhead is hidden under thick corrosion layers. The opposite side of the tip is hollow. Dimensions: L=7.5cm;WT=26.7g. Recovered in 1964.

The schematic representation below gives an overview of the corrosion layers encountered on the object from a first visual macroscopic observation. 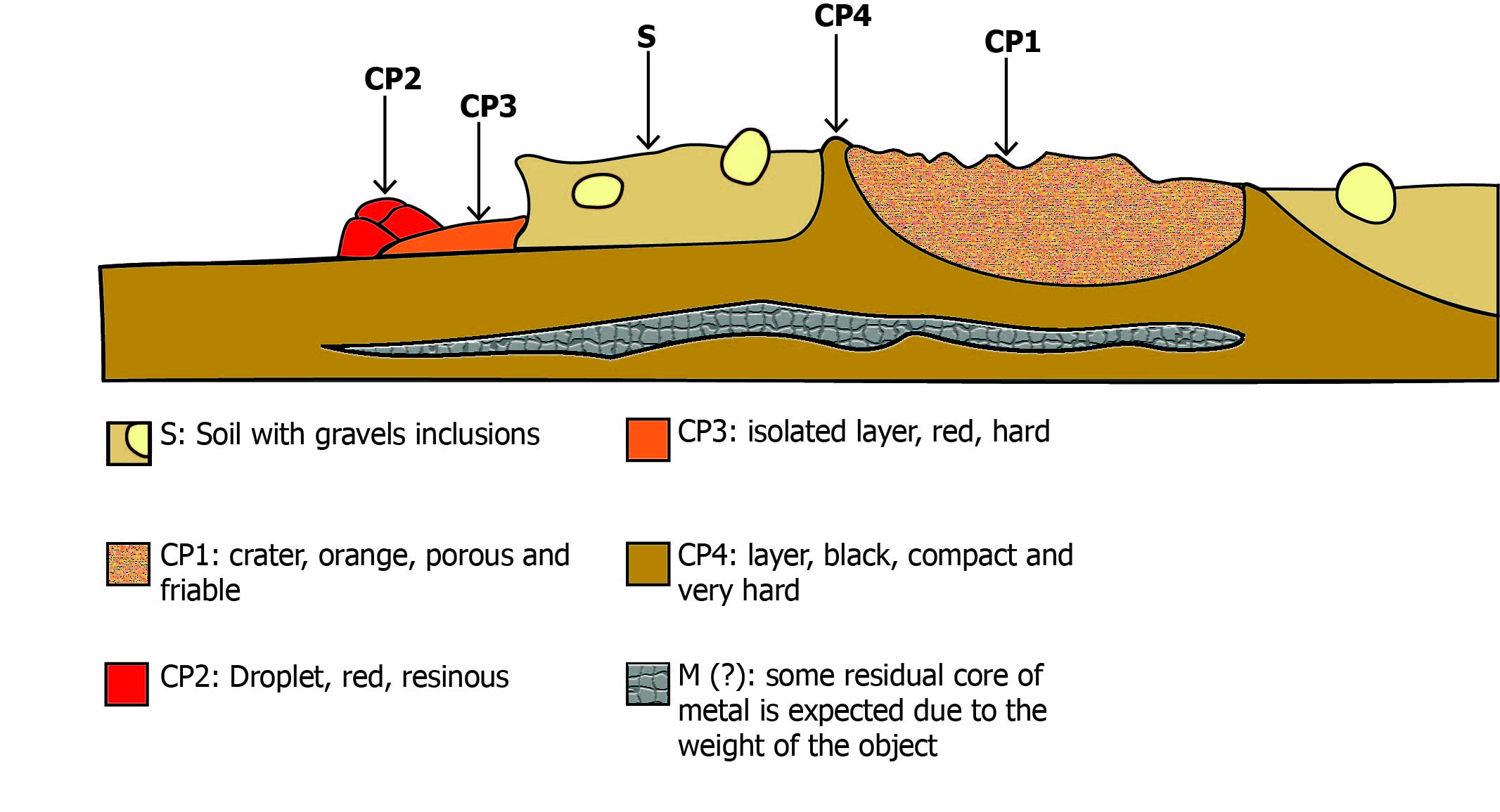 Fig. 4: Stratigraphy of corrosion layers obeserved on the arrowhead

Fig. 5: Stratigraphic representation in cross-section from Fig. 4 using the MiCorr application. The characteristics of the strata are only accessible by clicking on the drawing that redirects you to the search tool by stratigraphy representation

Fig. 6: Stratigraphic representation in cross-section from Fig. 4 using the MiCorr application. The characteristics of the strata are only accessible by clicking on the drawing that redirects you to the search tool by stratigraphy representation
Sample

No samples were taken

No analysis was carried out on this object.

Some similar arrowheads from this collection were sampled for a study on arrowheads. Those objects with similar corrosion patterns all show a high amount of uncorroded metal in the middle. (Reference?) As the object is quite heavy for its volume, we presume that an iron core is still present.

The object has thick corrosion in a typical form for archaeological iron with presence of chlorides. A thick layer of soil (S) with gravel is covering most of the object. A chip on the opposite side of the tip lets see the succession of corrosion layers. In fig. 4, CP1 (crater and orange) is probably a reaction of iron with chloride present in soil (akaganeite). A lifting of the original surface (CP4) occurs and the surface breaks, revealing the active corrosion layer (CP1). CP2 (red droplet) is a hint for active corrosion that went to too high relative humidity. It seems that after discovery, the object was stored in high humidity, which allows the formation of iron copper droplets that formed on CP2. CP3 probably got formed on the same reaction or is a side reaction.

Even though we have two typical marquors for active corrosion - orange powdery layers on a crater and droplets (Selwyn et al, 1999) - the object seems to be stable. The original surface is probably localized on CP4, but the presence of CP1 let think that a lot of uprising of the limits of the original surface occurs. If this object should ever be treated, that information should be taken into account. A treatment could as well allow the activation of chlorides pouch that is protected by the corrosion and soil layers.

No microscopic investigation was done on this object.

The documentation of this object allows the description of a typical corrosion pattern for archaeological iron. It states of conservation hint that the object has been through active corrosion but is now stable on its actual condition.