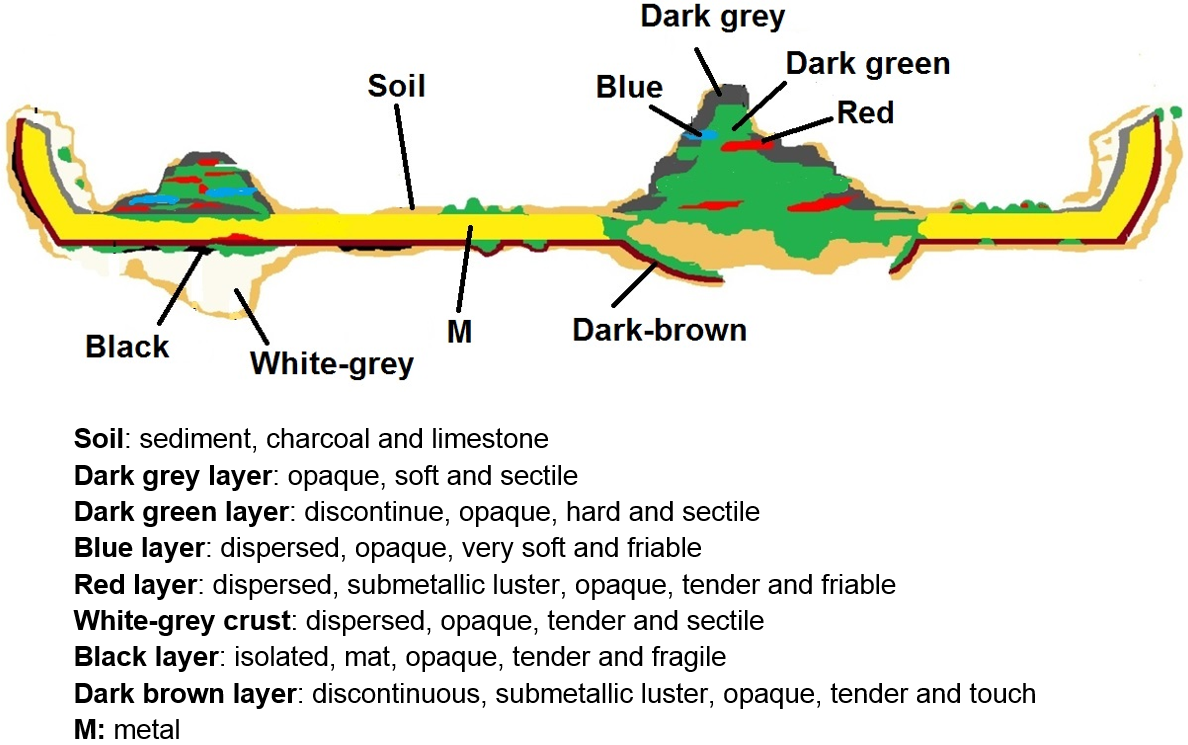 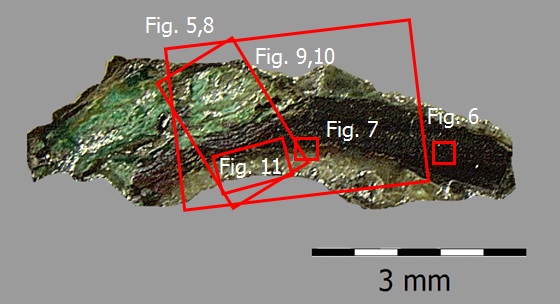 Fig. 4: Micrograph of the cross-section showing the locations of Figures 5 to 11,

The remaining metal is a tin bronze (Table 1). The etched metal shows a structure of polygonal grains with twin and strain lines (Fig.6). 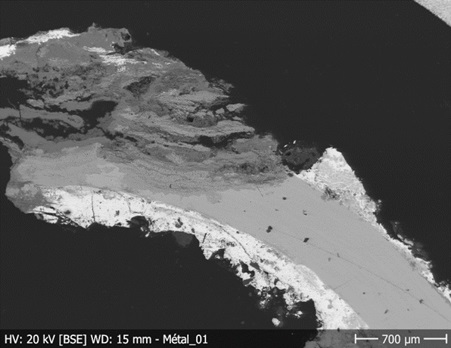 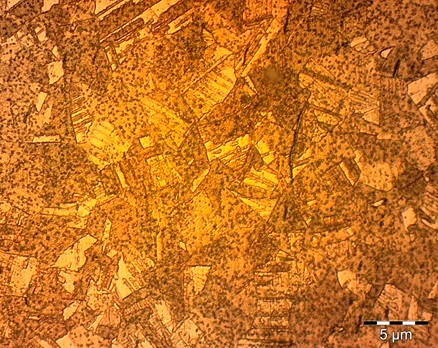 Fig. 6: Micrograph of the metal sample from Fig. 4, etched, bright field, 50x. Polygonal and twinned grains with strain lines are observed. The dotted surface is the result of over-etching,

Intergranular corrosion is observed on the edges of the remaining metal (Fig. 7).The sample shows two forms of corrosion: multi-layered pustule corrosion at the left extremity of the sample (Fig. 8, area 1) and a corrosion crust covering the metal (Fig.8, area 2). The multi-layered pustule corrosion has an average thickness of about 1.1 mm (L) and 0.79 mm (W) (Fig.9). It is composed of a sandwich of 7 corrosion products, mainly green, grey, red and blue in dark field. Microscopic observation allows us to highlight new corrosion products that were not detected during the first visual examination (Fig. 9):

Superior markers such as contextual Si, Fe and P are present in several layers. Their penetration illustrates the cracking of the primary corrosion layer during the formation of the pustule. The P-enrichment in some corrosion layers may be due to an environment rich in organic material (for example bones). The multi-layered pustule corrosion type has developed similarly to the process presented by Formigli (1975, p.53) and Scott (2002, p.337). 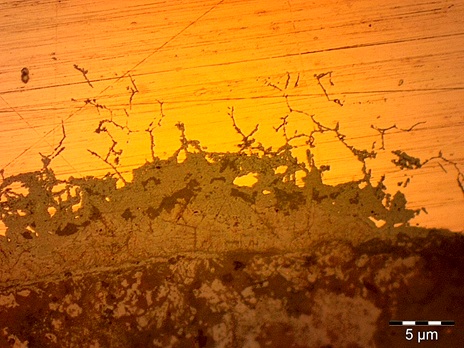 Fig. 7: Micrograph of the metal sample from Fig. 4, unetched, bright field, 50x. The grain boundaries are revealed by the intergranular corrosion, 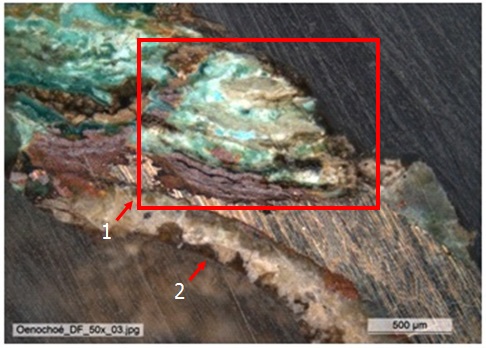 Fig. 8: Micrograph of the metal sample (same as Fig. 5, 30° rotated), unetched, dark field, showing the location of the multi-layered pustule corrosion (area 1) and the corrosion crust (area 2). The mapped area (Fig. 10) is marked by a red rectangle, 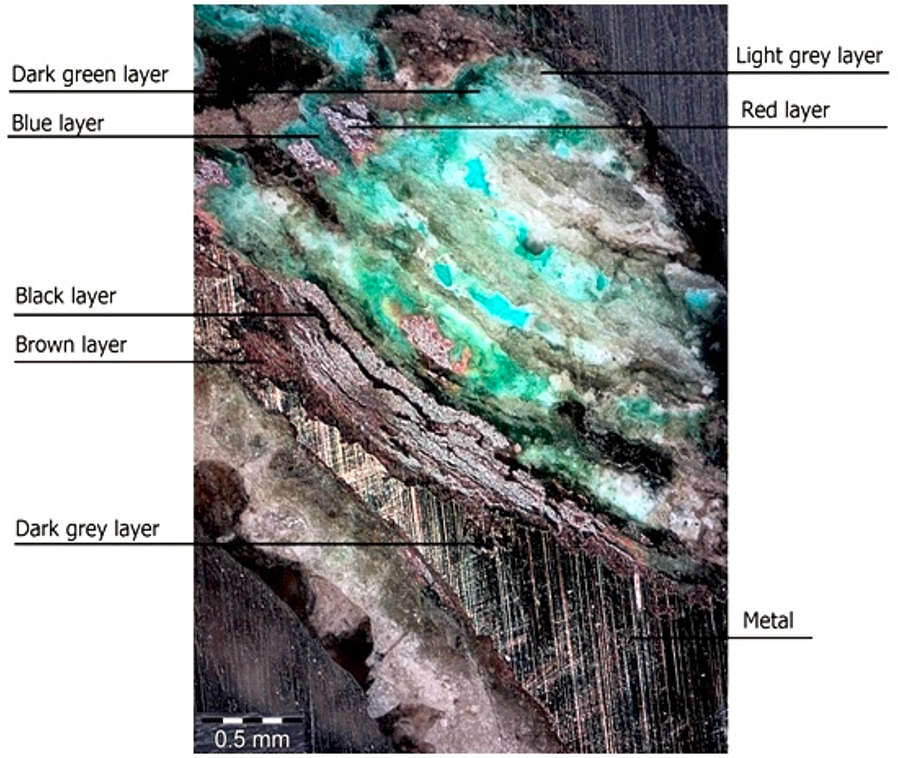 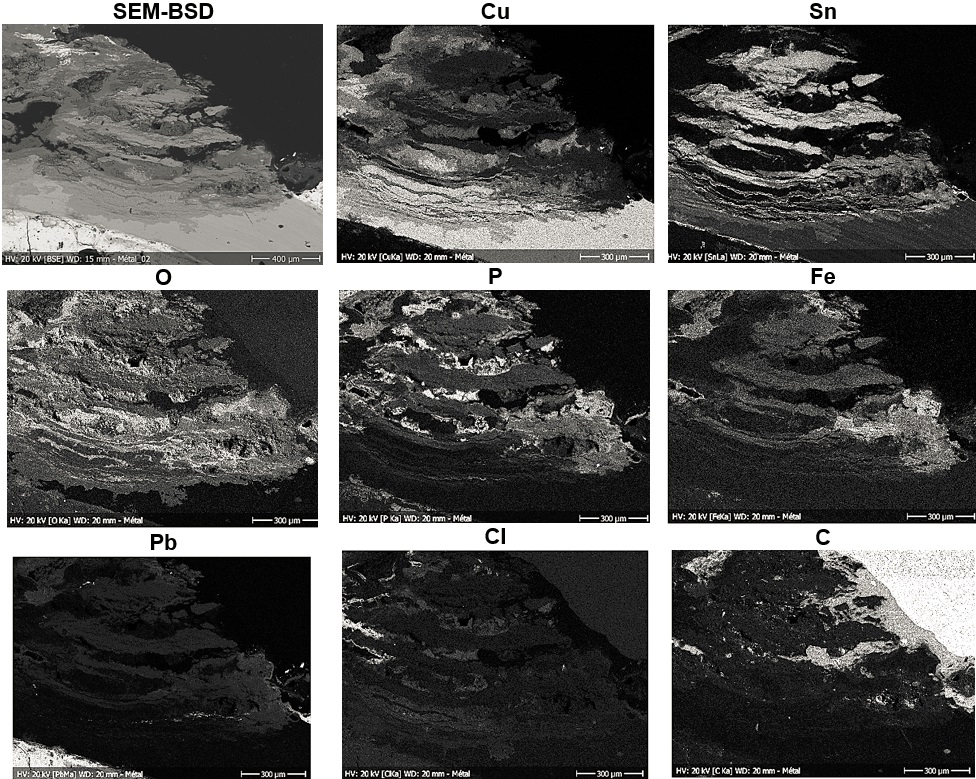 Based on the analyses carried out, the schematic representation of the stratigraphy of the multi-layered pustule form has been corrected. 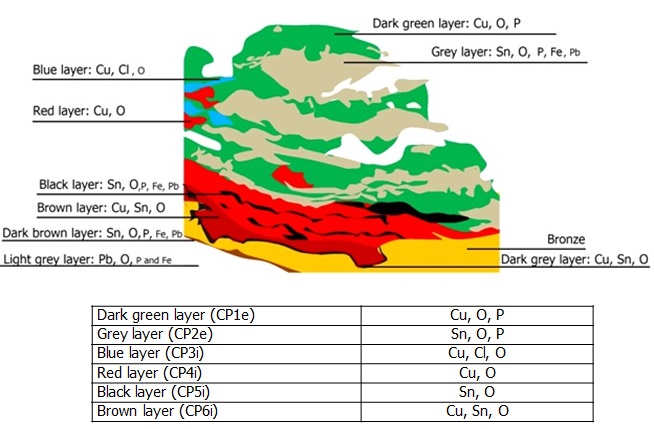 Fig. 12: Improved stratigraphic representation of the multi-layered pustule form on the oenochoe from visual observations and analyses,