Rain gutter fragment (Fig. 1), possibly part of the extension of a roof drain pipe. Both the exterior and interior surfaces are covered by heterogeneous corrosion crusts. The underlying metal seems however to be well preserved, including features such as a difference in thickness etc. Dimensions: L = 55mm; W (interior) = 120mm; Tmax. = 6mm; WT = 176g.

Fig. 2: The exterior and interior faces before sampling. The dotted line represents the sample location (a cross-section of the metal). The fracture edge corresponds to the edge that was formerly attached to the remaining artefact,

The schematic representation below (Fig. 3) gives an overview of the strata encountered by visual macroscopic observation. 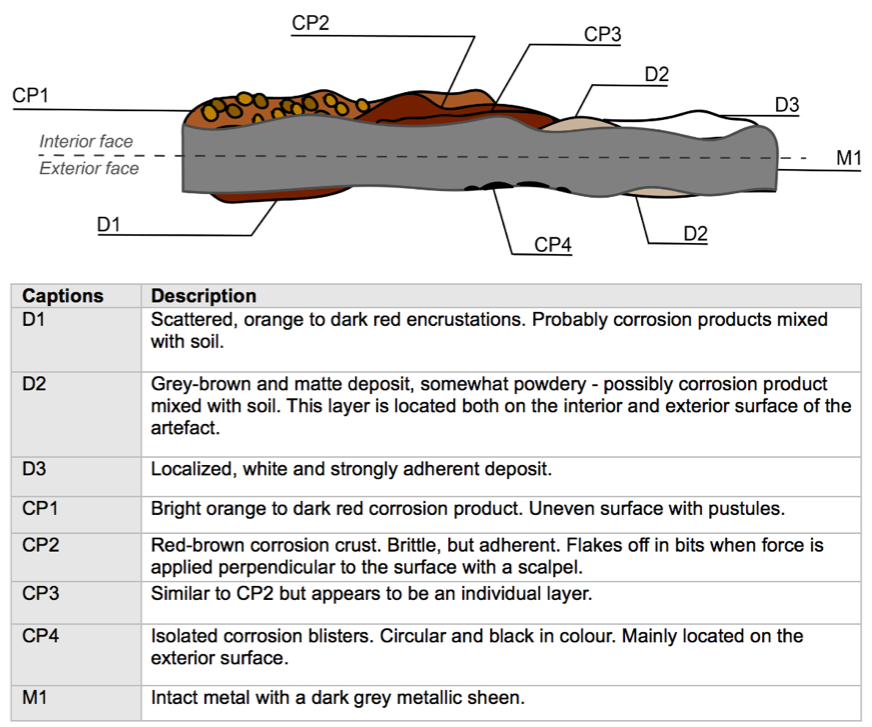 Fig. 3: Preliminary stratigraphy corresponding to the overall surface of the artefact. The interior surface is shown above the stippled line and the exterior surface below. D = Deposit, CP = Corrosion products, M = Metal, 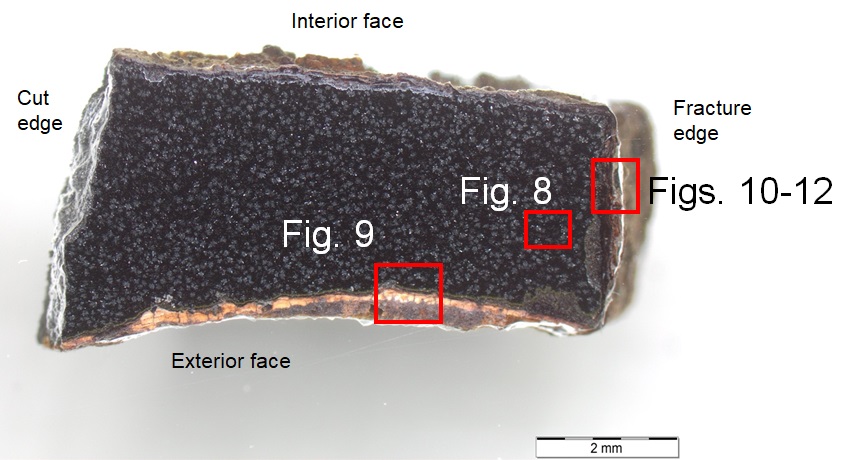 Fig. 4: Micrograph of the sample taken from the rain gutter fragment showing its orientation relative to the artefact and the locations of Figs. 8-12,

Fig. 5: Stratigraphic representation of the sample taken from the rain gutter fragment in cross-section using the MiCorr application. The characteristics of the strata are only accessible by clicking on the drawing that redirects you to the search tool by stratigraphy representation. This representation can be compared to Fig. 9. CP1 corresponds to CP2 in Fig. 3, credit MiCorr_UiO-IAKH, M.Hovind.

Fig. 6: Stratigraphic representation of the sample taken from the rain gutter fragment in cross-section using the MiCorr application. The characteristics of the strata are only accessible by clicking on the drawing that redirects you to the search tool by stratigraphy representation. This representation can be compared to Fig. 11. D1 corresponds to D3 in Fig. 3, credit MiCorr_UiO-IAKH, M.Hovind.

The sample consists of a rectangular section (Fig. 4) which was cut out from the fractured edge of the gutter fragment. It is representative of three surfaces: the exterior and interior surface, as well as the fracture edge. Dimensions: L = 7mm; Wmax. = 5mm; Tmax. = 4mm (approx.).

The fact that the artefact was considered a test material enabled extensive sampling that would not otherwise be possible.

The metal is a P-rich grey cast iron with Si and Mn (Fig. 7). Its microstructure is characterized by evenly distributed graphite flakes in a matrix composed of dendrites and an interdendritic eutectic phase (Fig. 8). What appears to be irregular graphite flakes / porosity is in fact deformed graphite flakes; graphite is soft and prone to destruction by smearing and/or preferential removal during polishing (Scott 1991).

* The value is the calculated average of three analyses of the same feature, but in different areas. 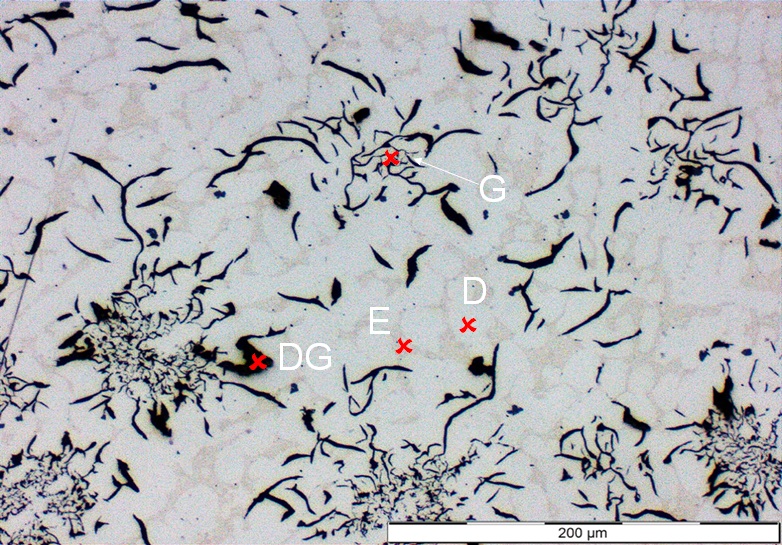 The exterior face (Figs. 2, 4 and 9) consists of a white / light yellow cracked layer (NMM1 in Fig. 5) superimposed by a layer of deposit mixed with orange-red corrosion products (D1 in Fig. 5). Punctual analysis by SEM-EDS (Table 2) revealed that the white / light yellow layer is rich in Ba, O, S, Fe, C and Zn. It has a chemical composition similar to Lithopone (BaSO4,ZnS), a preparatory paint layer. Fe is probably a contamination from the superimposed porous deposit / corrosion product D1 (Table 2). The latter (D1) is Fe- and O-rich and contains Si, Al and some Ca, in addition to a range of elements (K, P, Na, Cl, S and Ti) present in minor amounts (Table 2). A thin layer of corrosion products (CP1) is located just beneath the paint layer, appearing dark grey under polarized light (Fig. 9). This layer is followed by a corroded metal phase (CM1). Their exact composition was not analyzed but is likely to correspond to the corroded metal phase of the fracture edge, described below.

The interior face (Figs. 2 and 4) shows similar characteristics but does not include a white layer similar to NMM1. The fracture edge however (Figs. 2, 4 and 10), shows a more complex stratigraphy consisting of a dense product layer which can be further divided into two individual strata (CP3 and CP2), superimposed by a porous corrosion crust appearing orange under polarized light (CP1) (Fig. 11). The corroded metal (CM1) is located just beneath CP3 and contains remnants of the P-rich eutectic phase (Figs. 10-12). The M/CP ratio (metal to corrosion products) is rather high, implying extensive internal corrosion. Furthermore, a simple crack is traversing the corrosion layers – indicating a fragilization of the structure. As for the composition of the corrosion products CP1, CP2 and CP3, they all contain Fe and O (Fig. 12). A marbling effect within CP2 and CP3 indicates a variation in the concentration of Fe and O (particularly visible in bright field - Fig. 10). The white deposit (D1 in Fig. 6) might originate from exposure to calcareous water (Table 2). The presence of exogenous elements such as Si, Ca, Al, Na and O (Table 2) was confirmed by elemental mapping (Fig. 12).

Table 2: Chemical composition of the strata from Fig. 9. Method of analysis: SEM-EDS. Lab. of Electronic Microscopy and Microanalysis, Néode, HEI Arc, credit MiCorr_HEI Arc, C.Csefalvay. *The value is the calculated average of three analyses of the same feature, but in different areas. 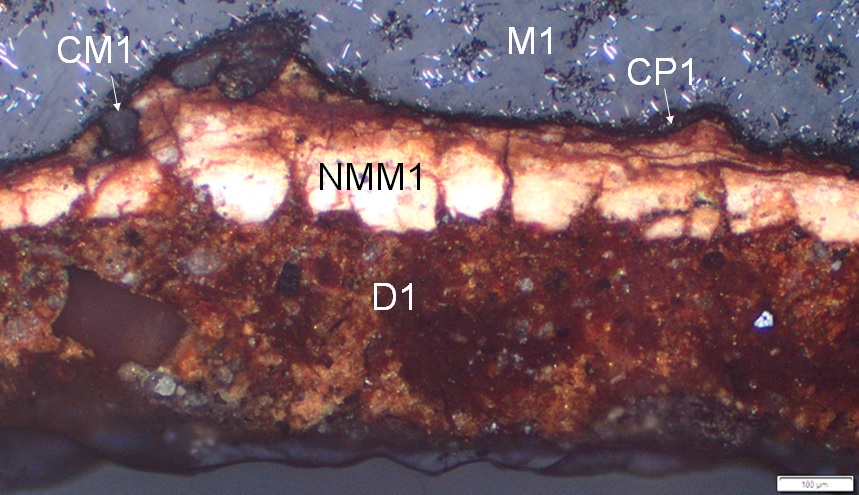 Fig. 9: Micrograph of the metal sample from Fig. 4 (detail), unetched, polarized light, 5x. The stratigraphy of the exterior surface, from top to bottom: the metal (M1) in grey, a layer of corroded metal (CM1) followed by a thin layer of CP1, and a white cracked layer (NMM1) superimposed by a porous dark-red deposit (D1), 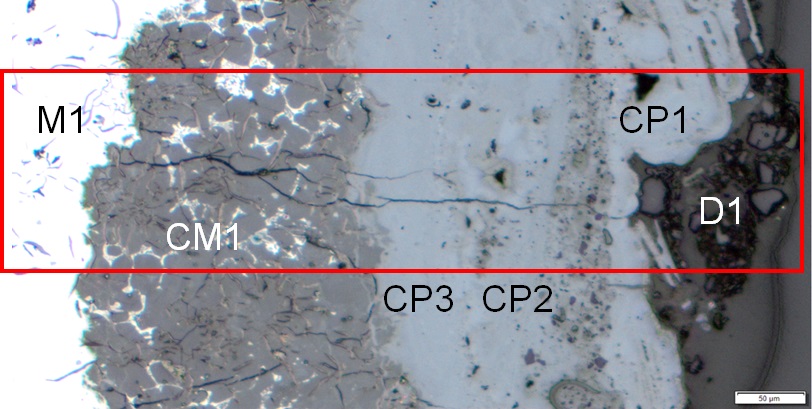 Fig. 10: Micrograph of the metal sample from Fig. 4 (detail), unetched, bright field. From left to right: intact metal (M1) in white, followed by preferentially corroded metal (CM1) and dense product layers (CP3 and CP2) in various shades of grey. CP1 is slightly porous and covered by grain-like particles (D1). The area selected for elemental chemical distribution (Fig. 12) is marked by a red rectangle. A simple crack is traversing the corrosion layers, 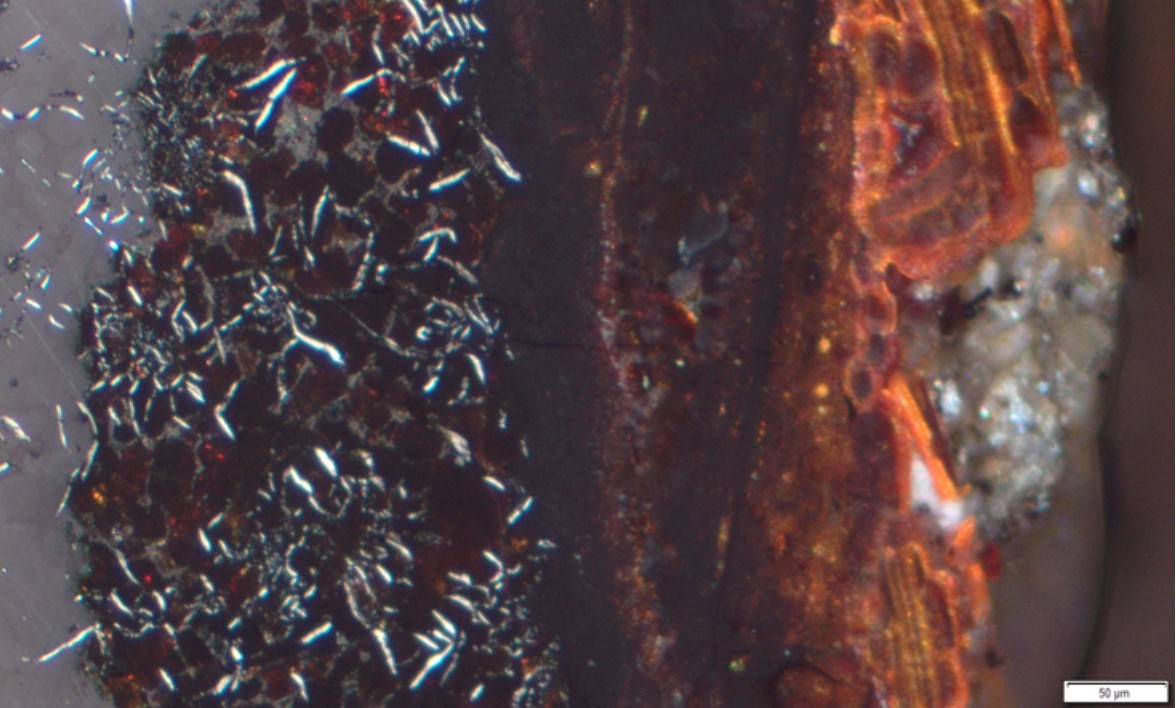 Fig. 11: Micrograph similar to Fig. 10 but under polarized light. The external deposit (D1) appears grey-white, CP1 in bright orange, while CP2 and CP3 appear dark red to brown. The corroded metal (CM1) contains remnants of graphite flakes (in white) and the P-rich eutectic (in grey), 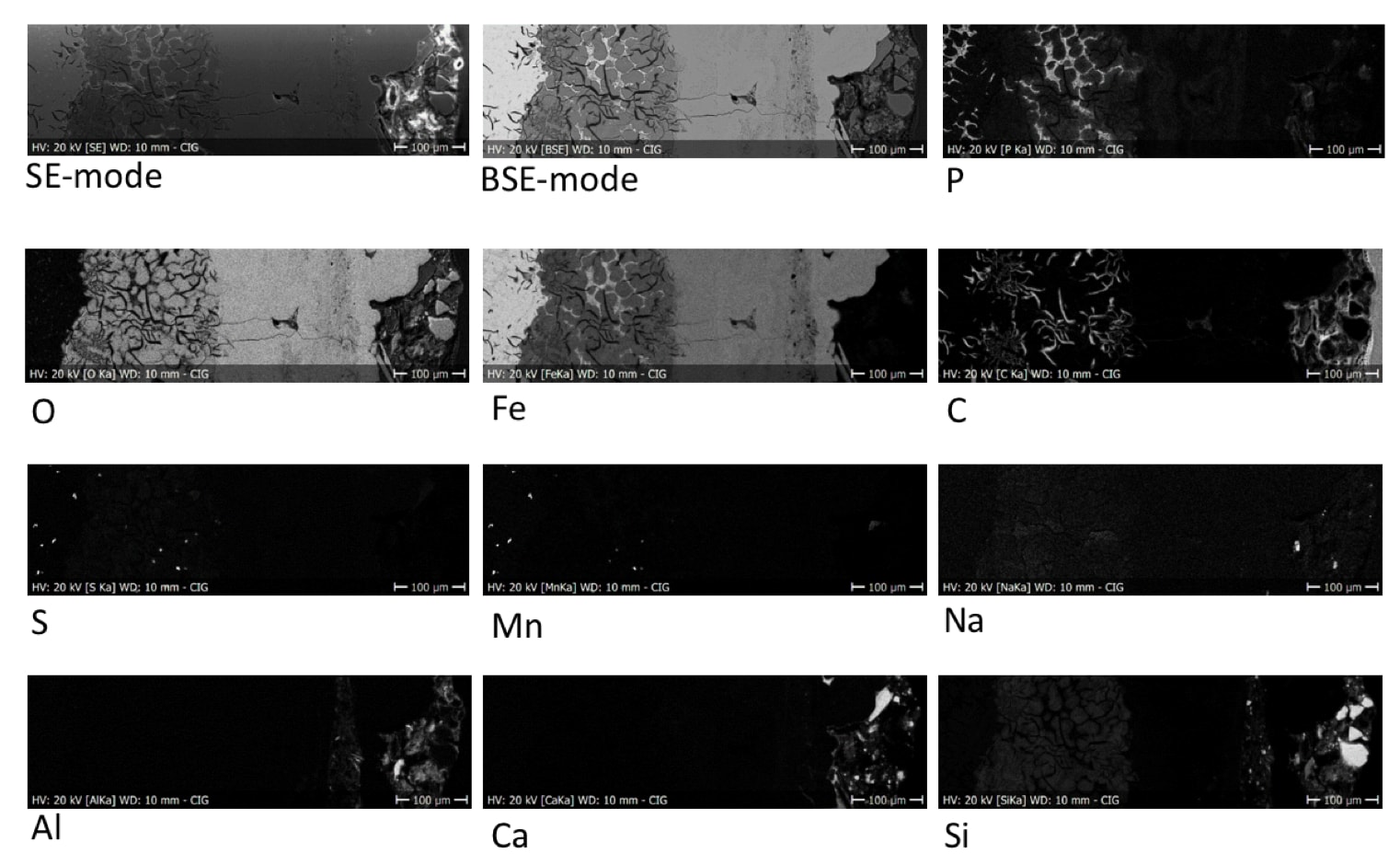 The rain gutter fragment is a grey cast iron with a microstructure consisting of graphite flakes and a P-rich eutectic phase. The exterior surface contains a preparatory paint layer, located beneath a layer of corrosion products mixed with soil. It seems likely that the cast iron gutter has been covered with a protective paint layer (e.g. Lithopone) to slow down the rate of atmospheric corrosion. The presence of Lithopone reinforces the suggested dating of the artefact (20th century) as this pigment was developed and used from the 1880s and onwards (Lithopone 2007). However, it seems that the protective layer has none or only very limited effect as (pitting) corrosion is present also in these areas.

The corrosion layers consist mainly of Fe and O, indicating atmospheric corrosion with presence of only a very small amount of contaminants/pollution. The scattered white deposit is possibly originating from exposure to calcareous water as it is localized mainly on the interior face of the fragment, where rain water would hit the metal before entering the ground.