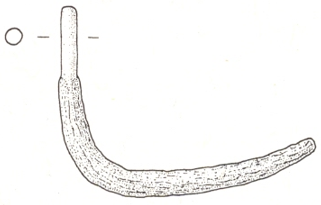 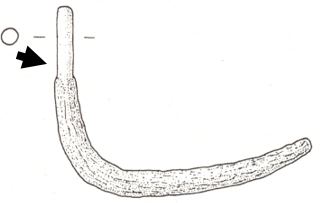 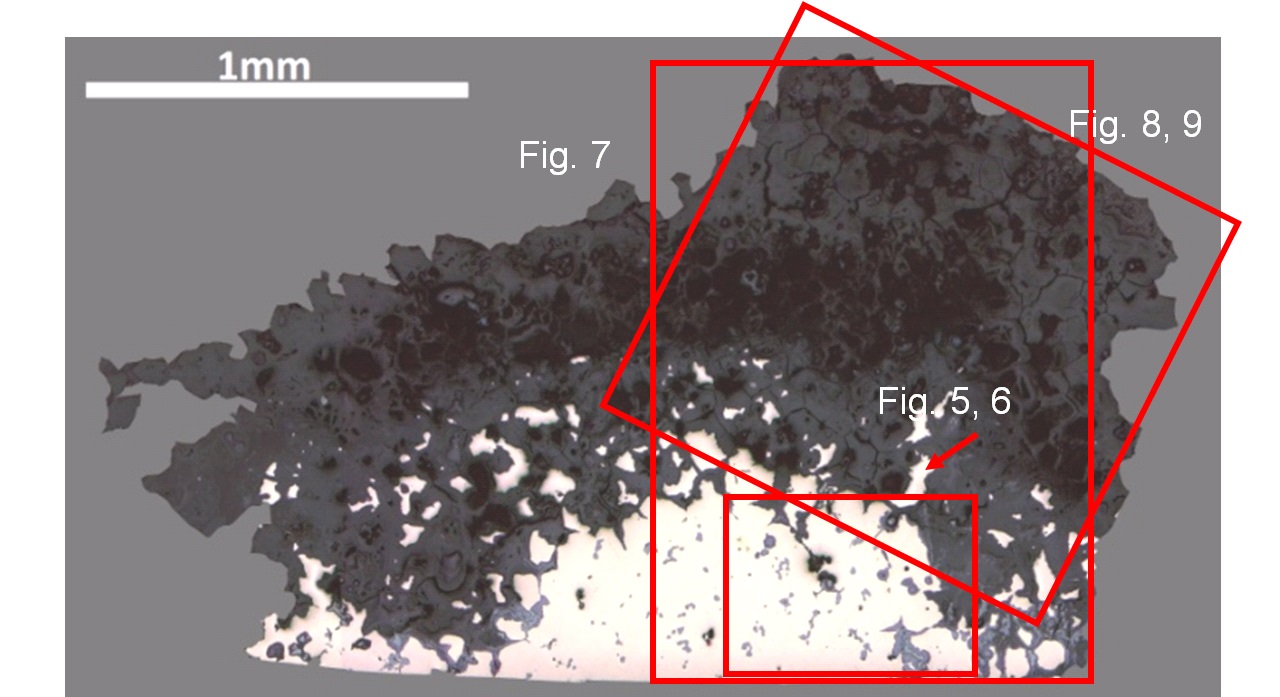 Fig. 3: Micrograph of the cross-section of the sample taken from the curved pin or tang showing the location of Figs. 5 to 9,

Fig. 4: Stratigraphic representation of the sample taken from the curved pin or tang in cross-section using the MiCorr application. The characteristics of the strata are only accessible by clicking on the drawing that redirects you to the search tool by stratigraphy representation. This representation can be compared to Fig. 7, credit MiCorr_HE-Arc CR.

The sample (Fig. 3) is a section from the pin (or tang). The metal is covered by a thick corrosion crust (blue layer adhering to the metal, topped by a green layer mixed with black corrosion products - Museum report (1992)). Dimensions: L = 1.8mm; W = 1.2mm.

The remaining metal is a tin bronze (Table 1) with copper sulphide inclusions that contain some Fe (Figs. 5 and 6, Table 2). After etching, the tin bronze shows polygonal grains with few twins (Fig. 6). The grain size varies between 70 and 180µm indicating grain growth due to an extended or excessively hot annealing process. The copper sulphide inclusions appear in blue. The average hardness of the metal is HV1 70. 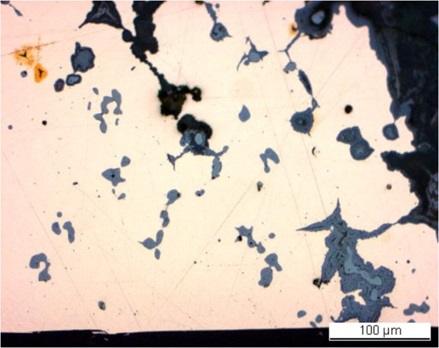 Fig. 5: Micrograph of the metal sample from Fig. 3 (detail), unetched, bright field. In pink the metal, in light-blue the copper sulphide inclusions and in dark- blue corrosion products, 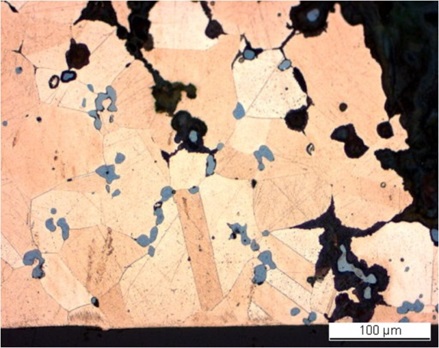 Fig. 6: Micrograph of the metal sample from Fig. 3 (same as Fig. 5), etched, bright field. In pink the metal with few twins, in black the resin and the corrosion products, in light-blue the copper sulphide inclusions,

The corrosion crust has an average thickness of 500µm but can in areas be much thicker (Fig. 3). It is divided in two layers. The inner layer is itself divided in two sub-layers: a thin light-grey sub-layer at the interface with the remaining metal surface (CP4, in bright field) which appears red-orange in polarised light (Fig. 7) topped by a medium-grey sub-layer (in bright field) that contains remnant metal (CP3). It turns dark-blue in polarised light (Fig. 7). The outer corrosion layer can also be divided into two sub-layers: a porous sub-layer (CP2) followed by a dark-grey sub-layer in which crystals are outlined by cracks (CP1, in bright field). Under polarized light, the latter turns blue-green while on top it appears olive and brown (Fig. 7). Chemically the corrosion crust is Sn enriched and Cu-depleted (Table 3, Figs. 8 and 9). The maximum of the Sn enrichment occurs on the outer olive and brown sub-layer (CP2). The corrosion layer also contains P, Si, C and O. Inclusions containing Fe or Ag can be found in the corrosion crust (Figs. 8 and 9). 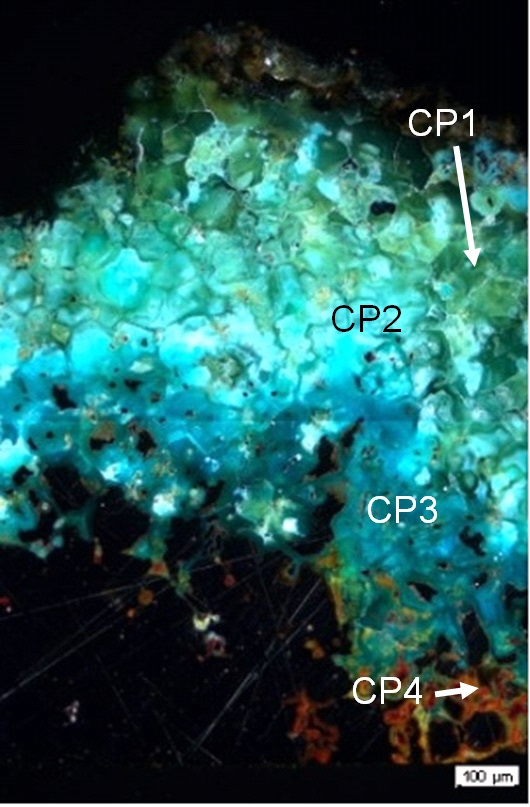 Fig. 7: Micrograph of the metal sample from Fig. 3 (detail) and corresponding to the stratigraphy of Fig. 4, unetched, polarised light. At the metal - corrosion products interface the colour of the corrosion layer is dark-blue, changing to green-blue in the outer part. The top surface of the corrosion crust is olive to brown, 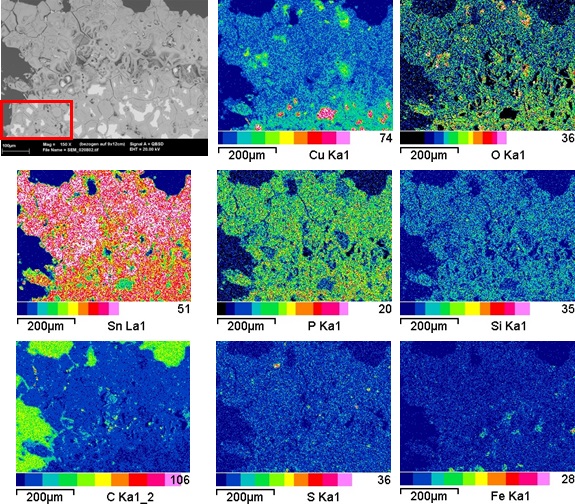 Fig. 8: SEM image, BSE-mode, and elemental chemical distribution of the selected area from Fig. 3 (due to repolishing before SEM/EDX investigation, the SEM image is slightly different from the area indicated in Fig. 3). The rectangle in the SEM image marks the detail mapping of Fig 9. Method of examination: SEM/EDS, Laboratory of Analytical Chemistry, Empa, 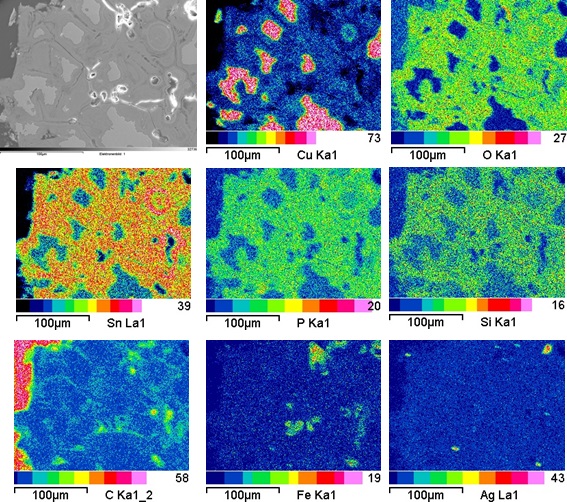 The tin bronze was exposed to an extended or excessively hot annealing process. This, combined with the extreme thickness of the corrosion crust and the dark surface, confirms that the object originates from a fire burial context. At the metal - corrosion crust interface some copper oxide (cuprite?) occurs. On top copper carbonates (azurite or malachite?) are mixed with tin oxide (cassiterite/SnO2?). Tin oxide dominates in the brown-black extremely Sn-rich outer layer. The P-enrichment in the whole corrosion layer may be due to an environment rich in organic material (for example bones). The original surface of the metal has been destroyed, presenting a type 2 corrosion layer after Robbiola et al. 1998.