Excavation 1983-1985, object from layer 1 (containing material from the Bronze Age until the 20th century) 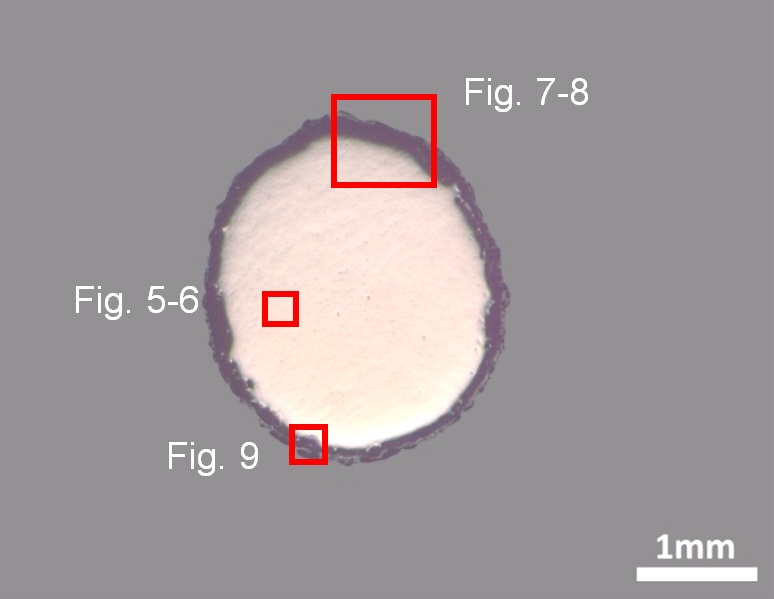 Fig. 3: Micrograph of the cross-section of the sample taken from the pin or needle fragment with green-blue patina showing the location of Figs. 5 to 9,

Fig. 4: Stratigraphic representation of the sample taken from the pin or needle fragment with green-blue patina in cross-section using the MiCorr application. The characteristics of the strata are only accessible by clicking on the drawing that redirects you to the search tool by stratigraphy representation. This representation can be compared to Figs. 7 and 8, credit MiCorr_HE-Arc CR.

The cross-section is circular and is a complete section through the pin (Fig. 2). The surface is completely covered with a rather thin corrosion crust of irregular thickness (Fig. 3).

The remaining metal is a tin bronze and contains small copper sulphide and Pb-rich inclusions evenly distributed throughout the metal (Fig. 5, Tables 1 and 2). The Pb-rich inclusions are only visible with SEM appearing as white particles. The etched structure of the tin bronze shows re-crystallised and angular grains, some of them with twins (Fig. 6). Strain or slip lines are visible, especially near the metal surface. They indicate a final cold working. Copper sulphide inclusions are found both at the grain boundaries and inside the grains (Fig. 6). The average hardness of the metal is about HV1 120. 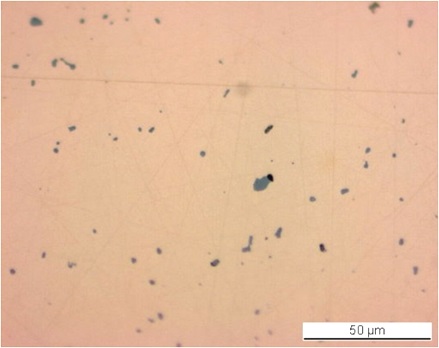 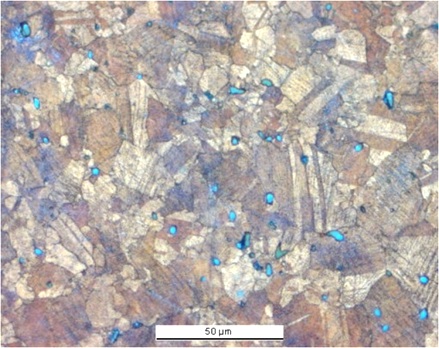 The corrosion crust has an average thickness of about 50µm (Fig. 7). In polarised light (Fig. 8), the corrosion stratigraphy is more clearly visible: it is composed of an inner orange-red corrosion layer (CP3, an agglomerate of nanoscale stannic oxides with cuprite) directly on the metal core (Table 3 and Fig. 9, already studied by Piccardo et al. 2007), an intermediate multi-layered black band (CP2) and an outer turquoise-green layer (CP1) analysed with XRD by Schweizer and identified as malachite/CuCO3Cu(OH)2 (Schweizer 1994, 150). In some areas the orange-red layers (CP3) can also be found in between the black band (CP2) and the malachite (CP1). Elemental chemical distribution of the SEM image of Fig. 9 shows that the black layers are enriched in Sn but also contain Fe (Fig. 9). Superior markers such as contextual Al and Si are present in the outer malachite layers. S is present both on the rim of the outer black layer and in the malachite (Fig. 9, Table 3). 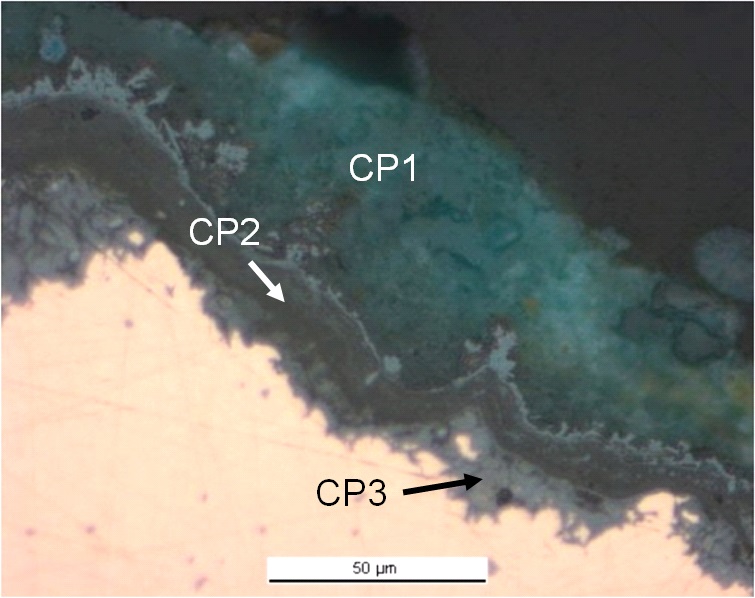 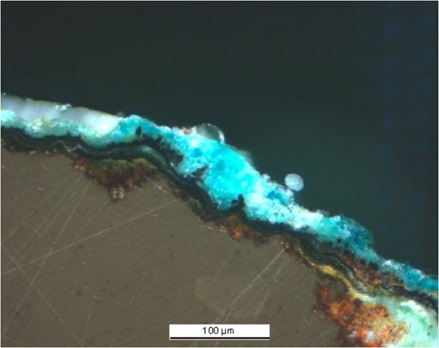 Fig. 8: Micrograph of the metal sample from Fig. 3 and corresponding to the stratigraphy of Fig. 4, polarised light. The metal appears in brown; the inner layer appears as red-orange, the intermediate layer as black and the outer layer as turquoise, 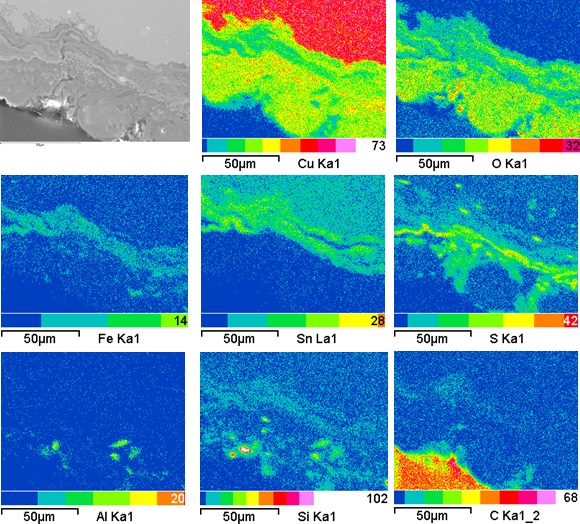 The pin is made from a tin bronze and has been repeatedly cold worked and annealed. After the last annealing there has been some cold work, as can be seen from the strain lines visible after etching the metal. Due to the presence in the corrosion crust of an outer malachite layer, the corrosion was described as terrestrial by Schweizer (Schweizer 1994). The elemental chemical distribution of the corrosion crust shows a more complex situation: as expected for an object buried in a terrestrial site, a typical enrichment of Sn is observed in the inner and intermediate layers covering the remaining metal surface. However it is combined with Fe and S which are often present in lake patinas. According to Schweizer, these layers were formed in anaerobic conditions and developed later on into malachite in an aerated soil through partial dehydration (Schweizer 1994, Schwartz 1934). Since the original surface is absent (destroyed), we refer to type 2 corrosion after Robbiola et al. 1998.