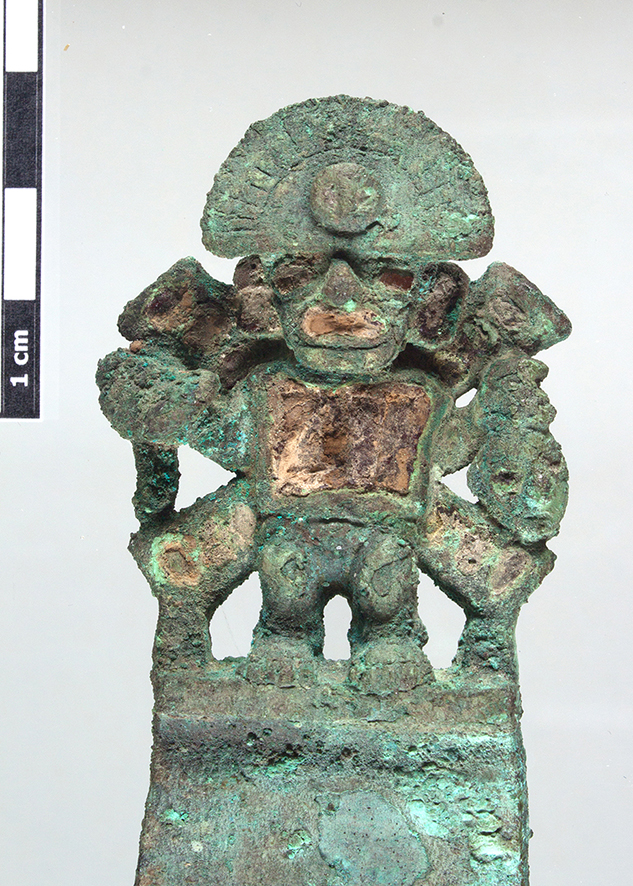 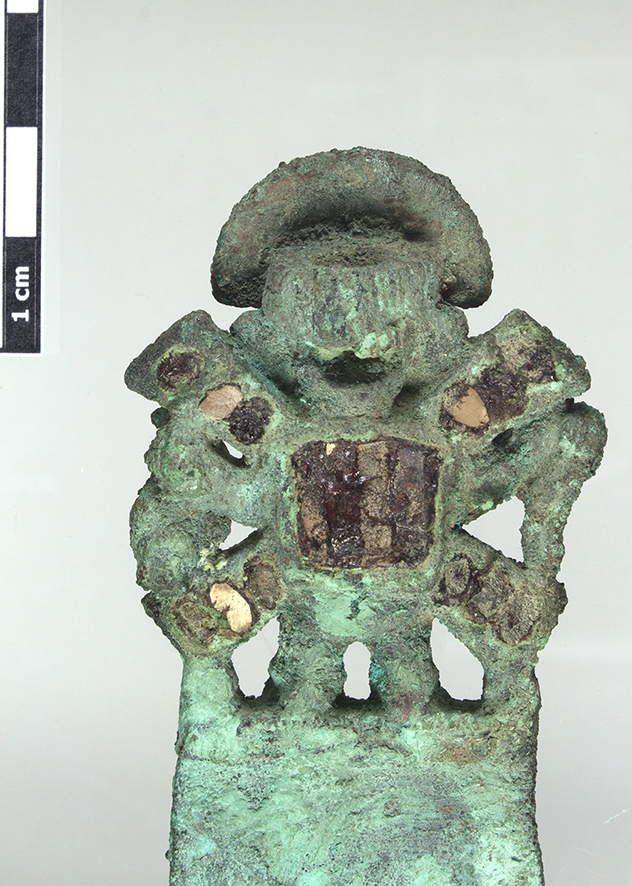 Sacrificial or ceremonial knife with semi circular flattened cutting edge and covered with blue-green corrosion products and sediments. Handle decorated with an anthropomorphic figure representing a whole person, holding a knife in his right hand and a severed head in his left hand. The character presents incrustations of organic and mineral materials. 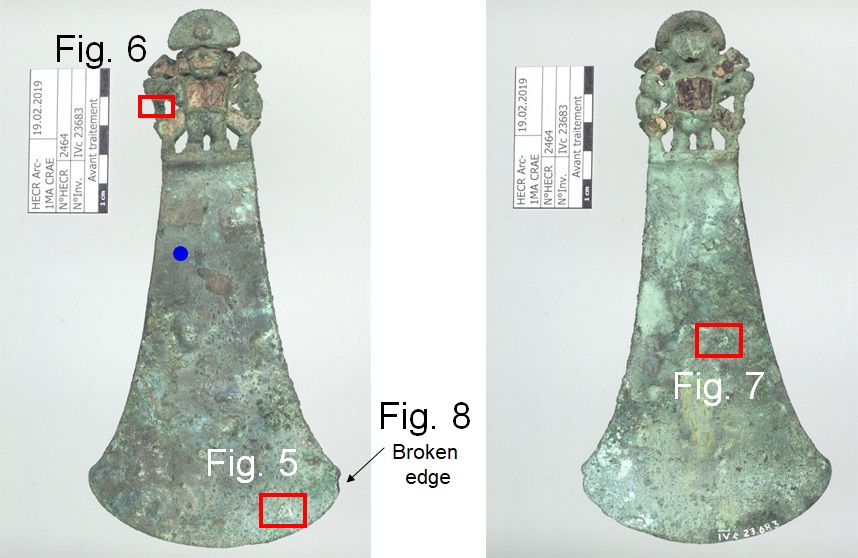 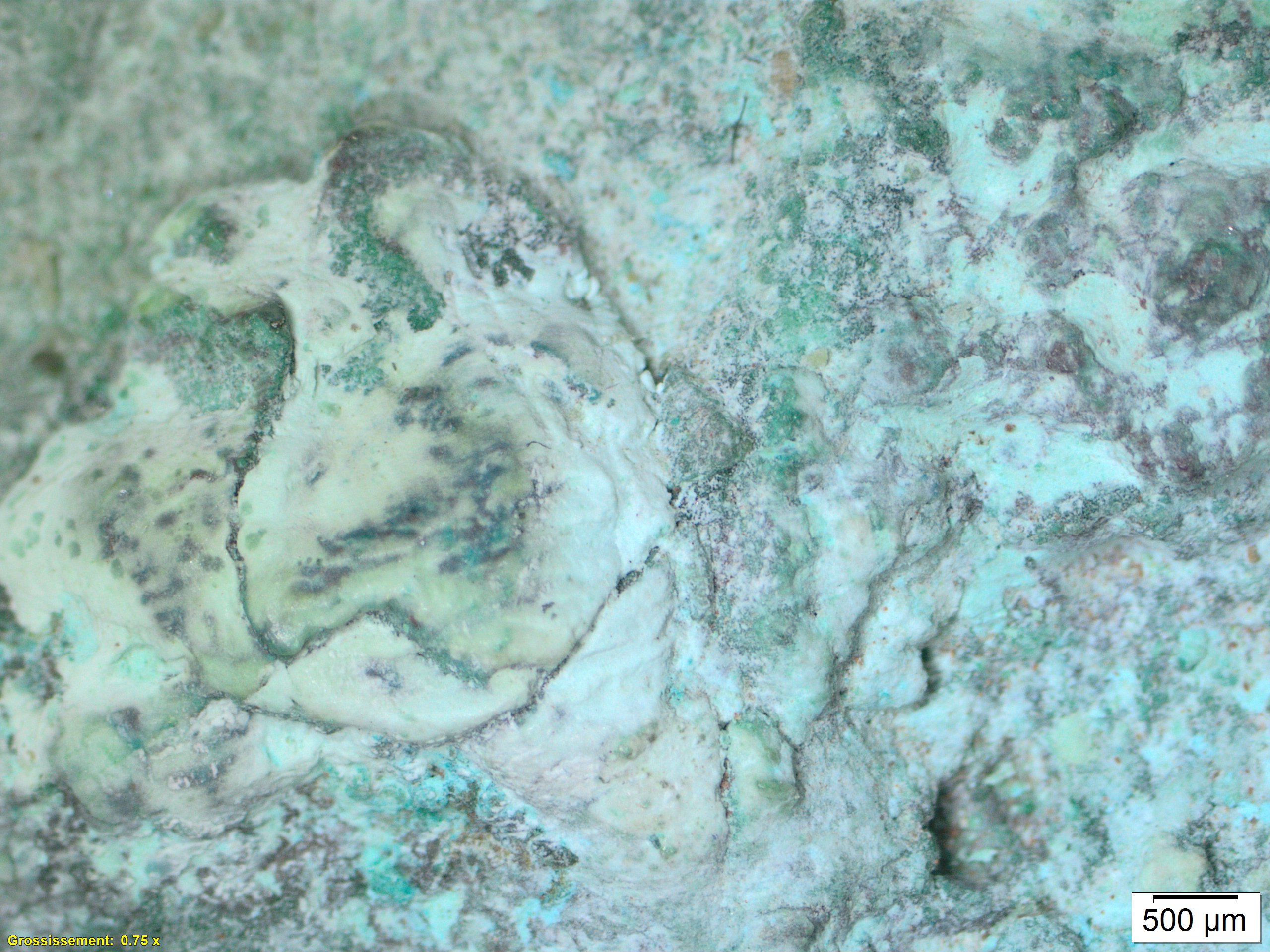 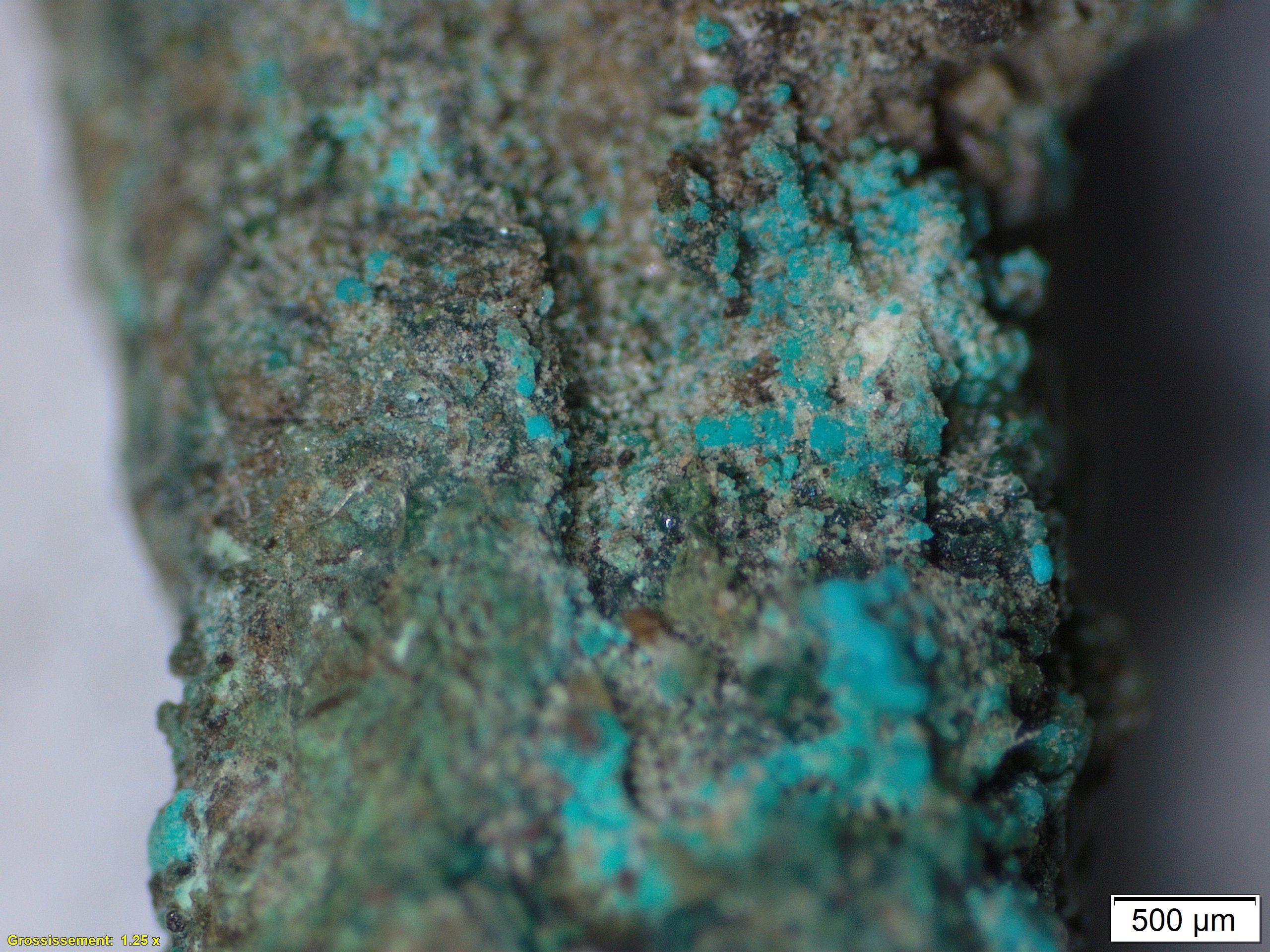 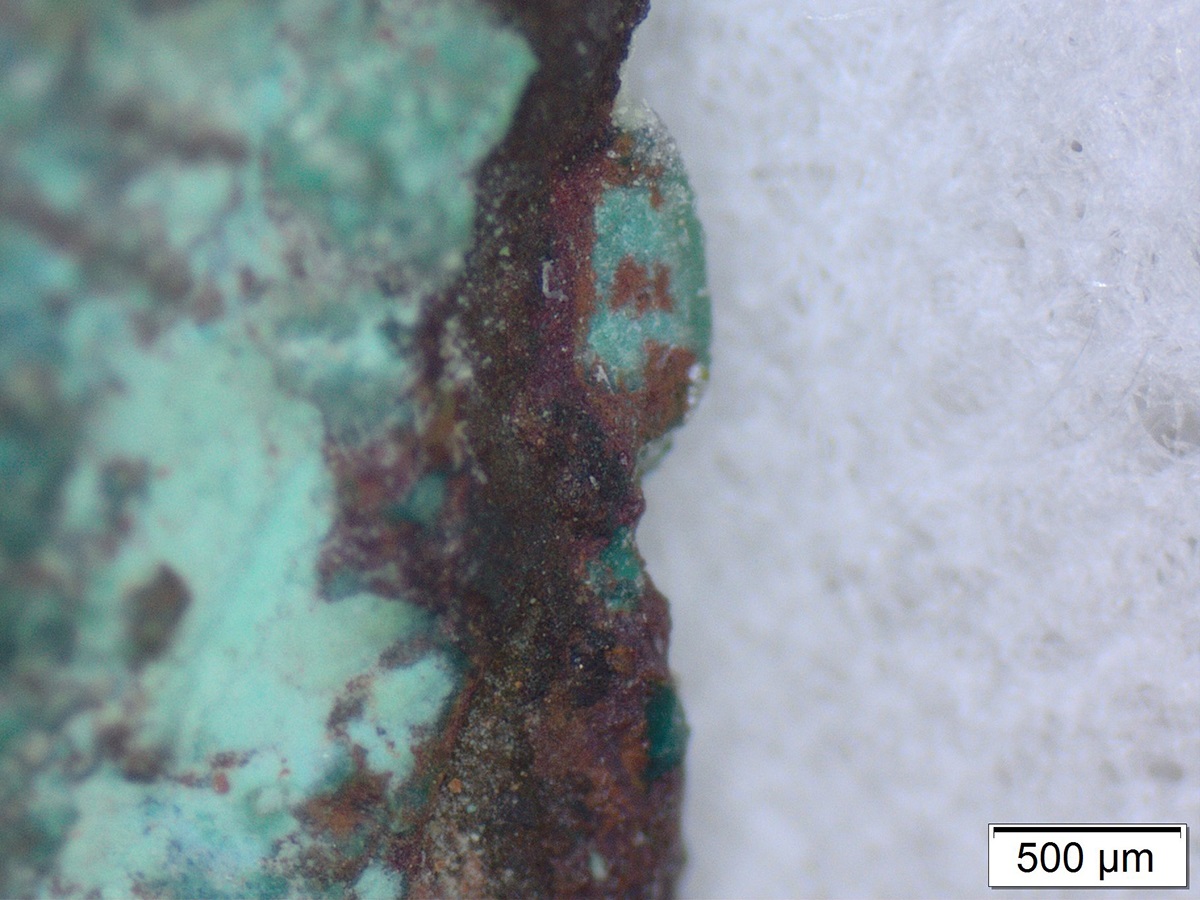 Fig. 9: Stratigraphic representation of the sacrificial knife in cross-section by macroscopic observation with indication of the MiCorr stratigraphy without CP1 (Fig. 9),

Fig. 10: Stratigraphic representation of fragment b of the military tag in cross-section using the MiCorr application. The characteristics of the strata are only accessible by clicking on the drawing that redirects you to the search tool by stratigraphy representation, Credit HE-Arc CR, A.Gerber.
Sample(s)

Not applicable since invasive sampling was not authorized by the museum. Only a few corrosion products on the surface of the sacrificial knife were sampled.

* Conditions were not documented.
** Directly on the metal with a portable X-ray fluorescence spectrometer NITON XL3t 950 Air GOLDD+ analyser from Thermo Fischer®.
*** On a few samples with a Jeol JSM-6400 device, HEI Arc, La Chaux-de-Fonds, Switzerland 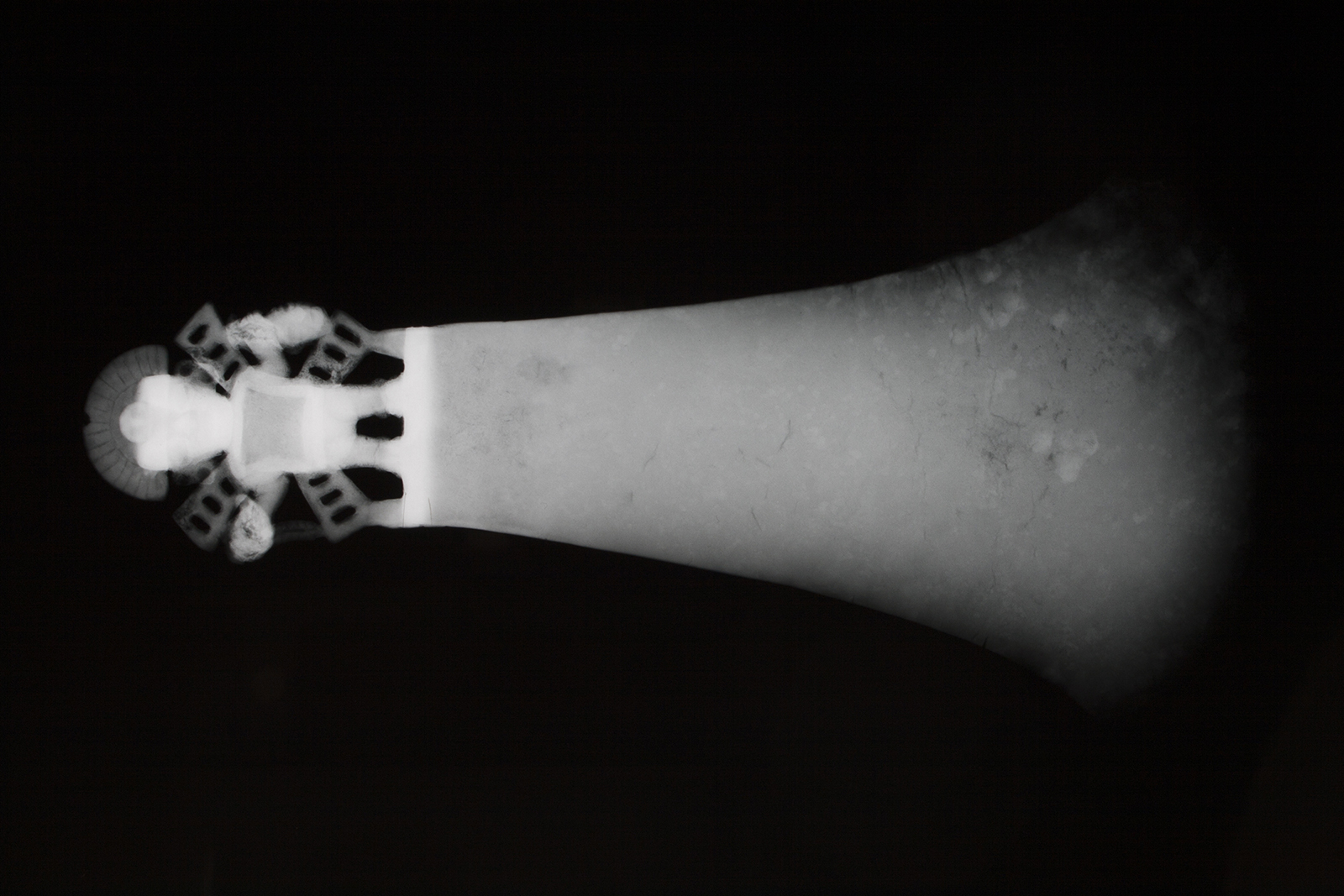 The metallographic structure is unknown, but it is likely that the object was cast and then reworked cold.
Depending on the area, there should be cored grains with remaining dendritic structure and, if the metal was annealed, grains with twin lines.

The surface of the object is corroded in a very heterogeneous way. Some zones correspond to Type I corrosion models according to Robbiola, and others to Type II with the formation of pustules (Formigli 1975). Parts of the object that have been cold worked and / or deformed are those with the most corroded surfaces, sometimes with complete lost of the limitos. The edge of the blade, for example, was hammered after casting and was bent during its use: it is one of the most corroded areas. 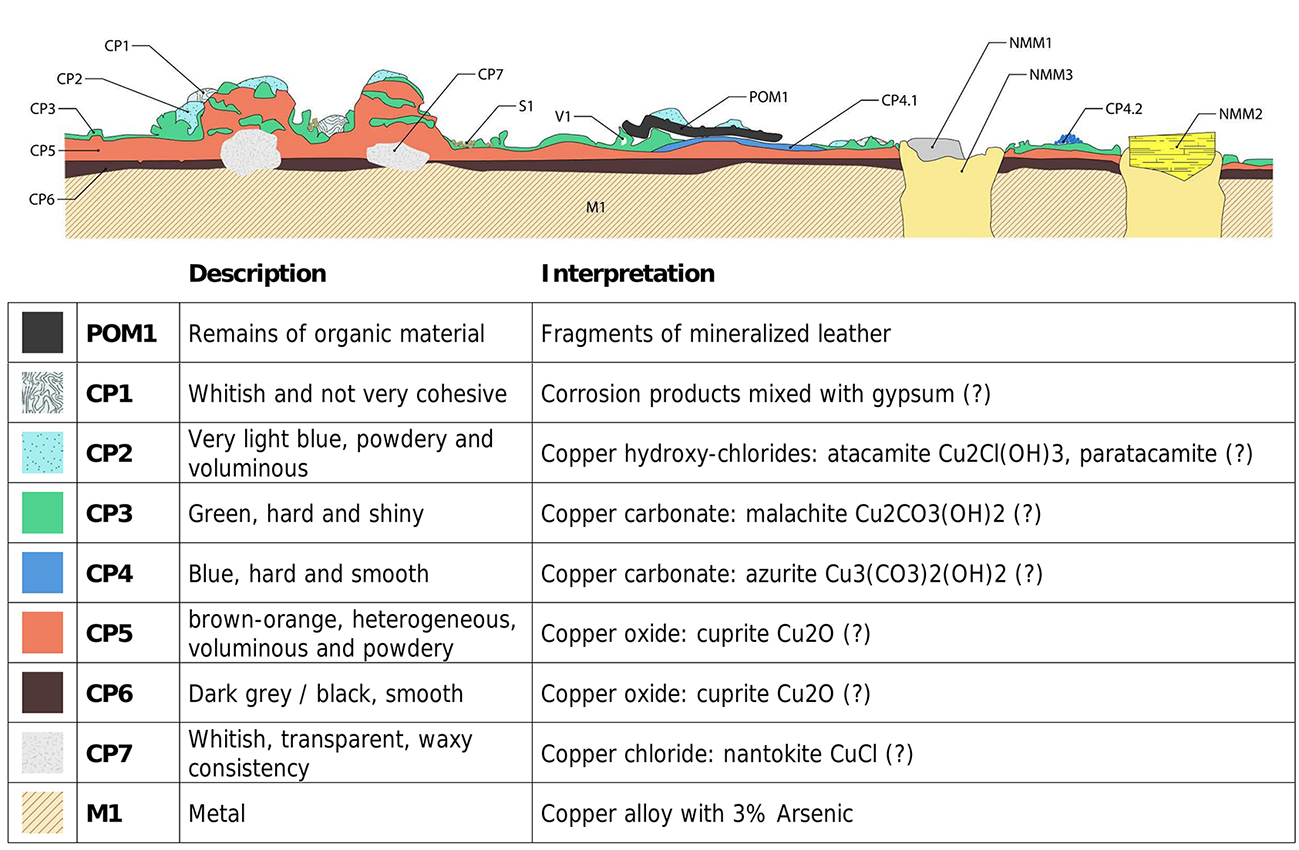 The metal of the sacrificial knife is an arsenical copper alloy. The object was cast and then cold-worked, probably hammered. The metal is heterogeneously corroded with Robbiola types I and II and pustules. In the analyzes carried out, the chlore element appeared, indicating a so-called "active" corrosion of the metal. The limit of the original surface is at the CP5 and CP6 interface.