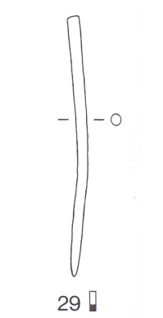 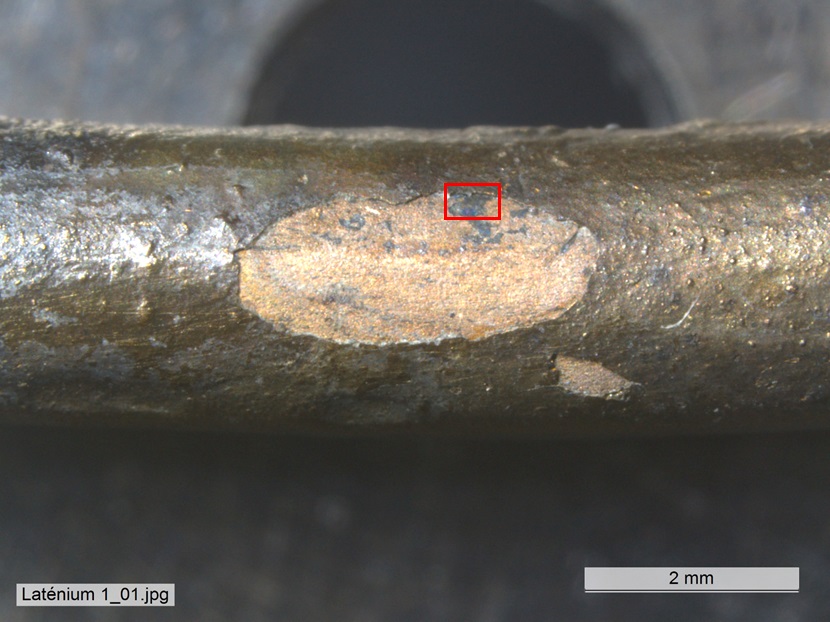 Fig. 2: Dense and smooth brown-yellow patina (detail) of the pin with lacuna showing the underlying metal with location of Fig. 4,

Smooth and dense brown-yellow patina has been extensively described by Schweizer (Schweizer 1994). 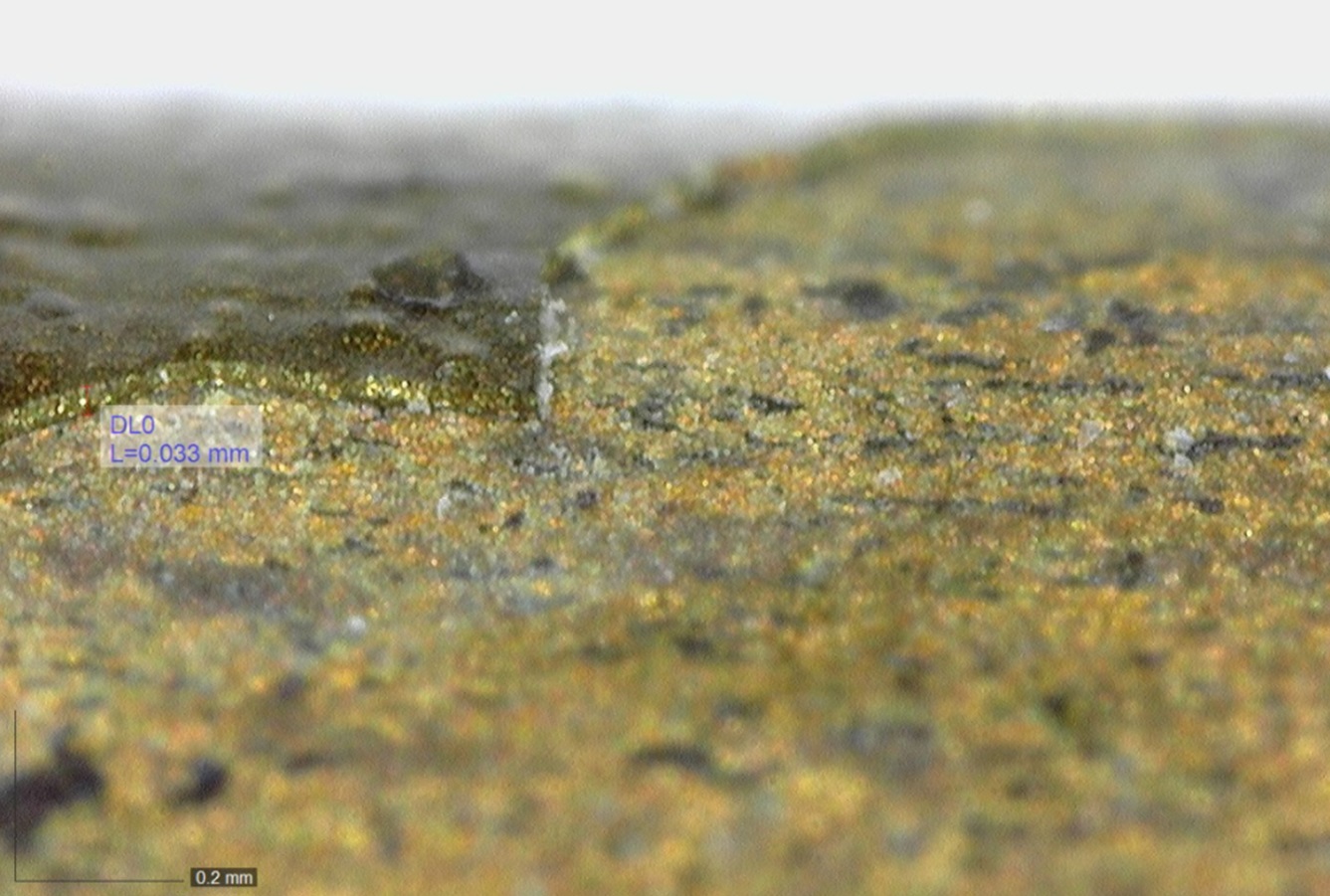 Fig. 3: Side view of a lacuna with the stratigraphy of the brown-yellow patina. 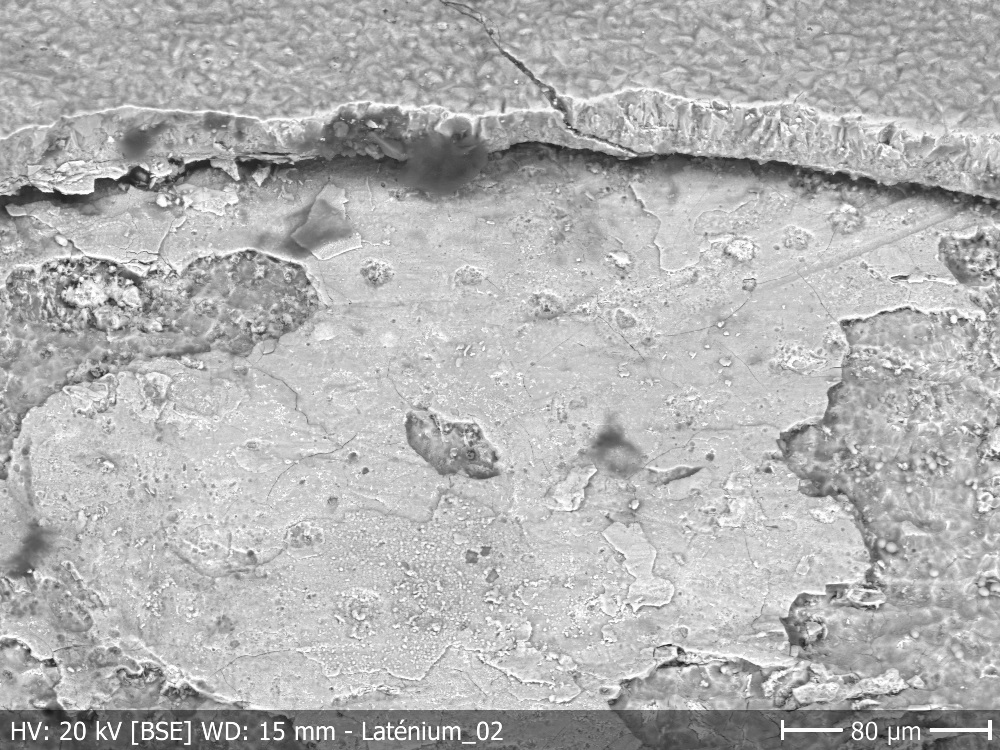 Fig. 4: SEM image of the pin from Fig. 2 (detail), BSE -mode. The crack between the remaining metal and the corrosion layers is clearly visible and the smooth layer below is CP3, 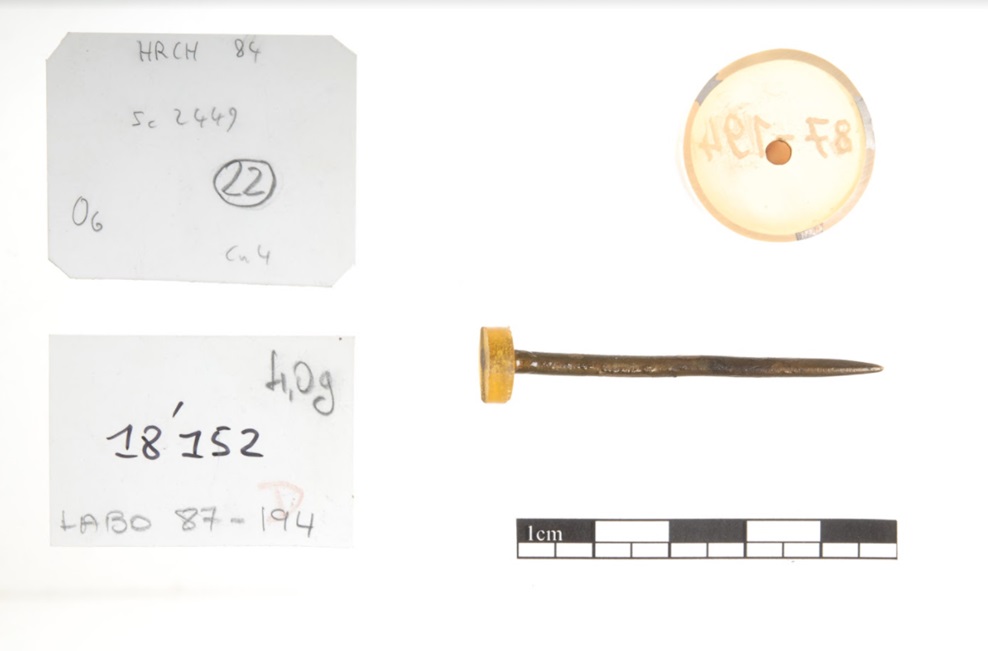 Fig. 6: Cross-section of the pin and remaining material,

The schematic representation below gives an overview of the corrosion layers encountered on the pin from a first visual macroscopic observation. 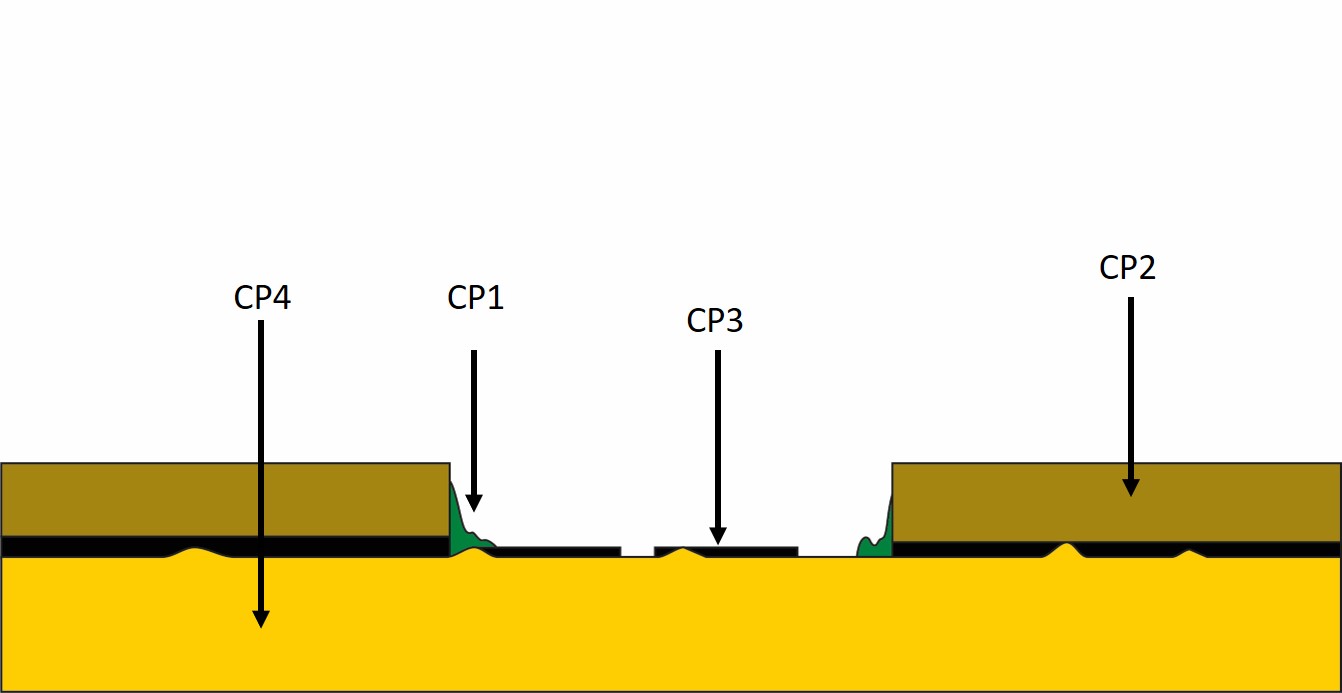 Fig. 7: Stratigraphic representation of the pin without head by macroscopic observation (under binocular),

Fig. 8: Stratigraphic representation of the pin without head under binocular using the MiCorr application. The characteristics of the strata are only accessible by clicking on the drawing that redirects you to the search tool by stratigraphy representation, credit MiCorr_HE-Arc CR.
Sample 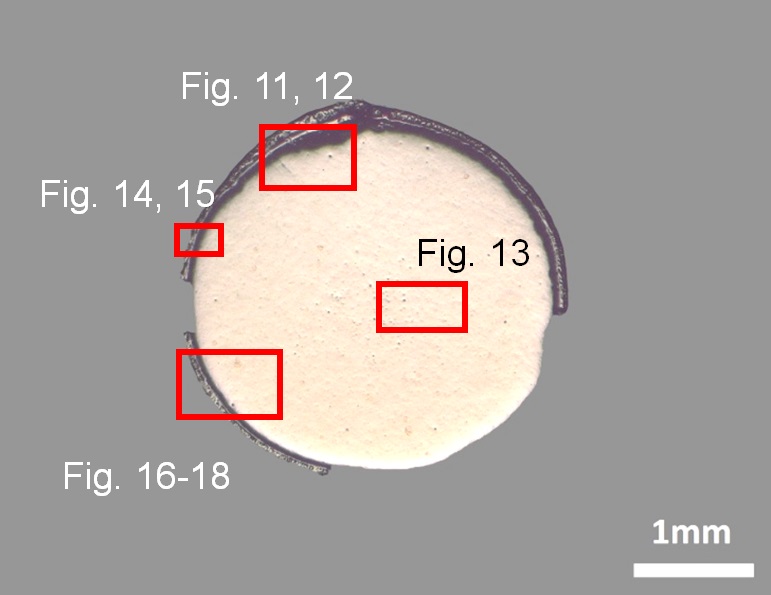 Fig. 9: Micrograph of the cross-section of the sample taken from the pin without head showing the location of Figs. 11 to 18,

Fig. 10: Stratigraphic representation of the sample taken from the pin without head in cross-section (dark field) using the MiCorr application. The characteristics of the strata are only accessible by clicking on the drawing that redirects you to the search tool by stratigraphy representation. This representation can be compared to Fig. 16, credit MiCorr_HE-Arc CR.

The cross-section is circular and is a complete section through the pin (Figs. 5 and 6). It is covered with a rather thin and regular (in thickness) corrosion crust (Figs. 3 and 4). One third of the corrosion crust is missing (Fig. 9).

This sample is mentioned in Schweizer, 1994. 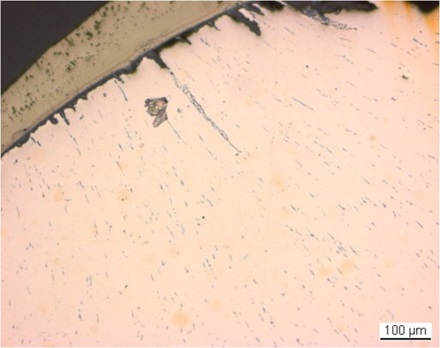 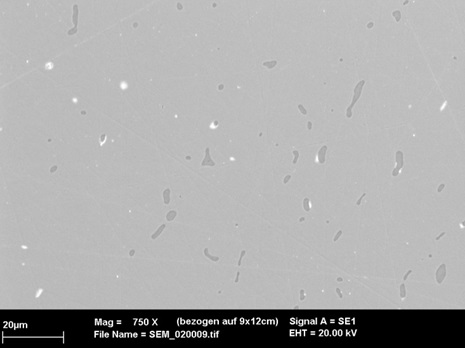 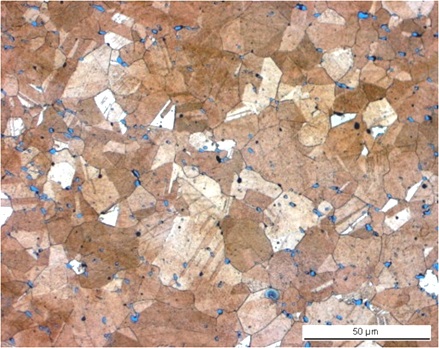 Fig. 13: Micrograph of the metal sample from Fig. 9 (detail), etched, bright field. The metal shows a structure of polygonal and twinned grains. Copper sulphide inclusions are visible as blue spots,

The corrosion crust (patina) is regular in thickness (around 50µm, Fig. 4). It presents lacuna (Fig. 2) and in some areas one third is missing (Fig. 9). At the metal - corrosion crust interface, there is a crack showing that the latter has separated from the metal core along its whole length (Figs. 4, 9, 11, 14-15). The corrosion crust can be divided into three distinct layers (CP1-3). Directly above the crack is a first dense but cracked and irregular inner layer (CP3, Figs. 4, 14-15). In bright field it appears brown (Fig. 16), in normal and polarised light dark brown (Figs. 2 and 17). It is separated from the adjacent layer by a clear line (Figs. 15 and 16). The second layer (CP2) is dense with little porosity (Figs. 14 and 15). In bright field it appears light brown (fig. 16), in polarised dark dark yellow (Fig. 17). The third and outermost layer (CP1) appears light brown under normal light (Fig. 3) and in bright field (Fig. 16), contains particles (Fig. 15) and is very porous (visible as golden reflections under polarized light, Fig. 17). These results are entirely consistent with Schweizer's observations (Schweizer 1994). The elemental chemical distribution of the SEM image selected reveals that the inner layer (CP3) is depleted in Cu, but rich in Sn,O and Si (Fig. 18 and Table 2) and its interface with the intermediate layer (CP2) could represent the limit of the original surface (Figs. 15 and 18). The second and third layer (CP2 and CP1) are Fe, Cu and S-rich (Fig. 18) and have a composition similar to chalcopyrite/CuFeS2 (Table 2). This was confirmed by XRD. The particles (inclusions) have a composition similar to covelline or covellite/CuS (Table 2). Both chalcopyrite and covelline have been identified by Raman spectroscopy (Figs. 19 and 20). 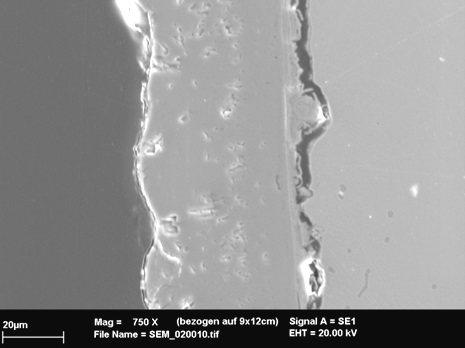 Fig. 14: SEM image of the metal sample from Fig. 9 (detail), SE-mode. The crack between the remaining metal and the corrosion layers is clearly visible, 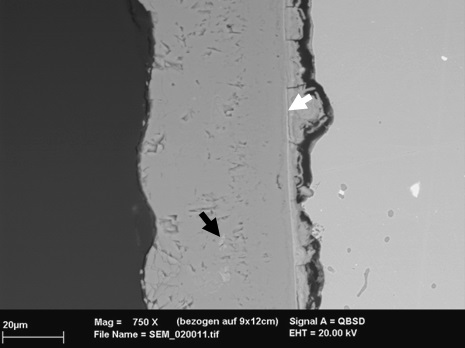 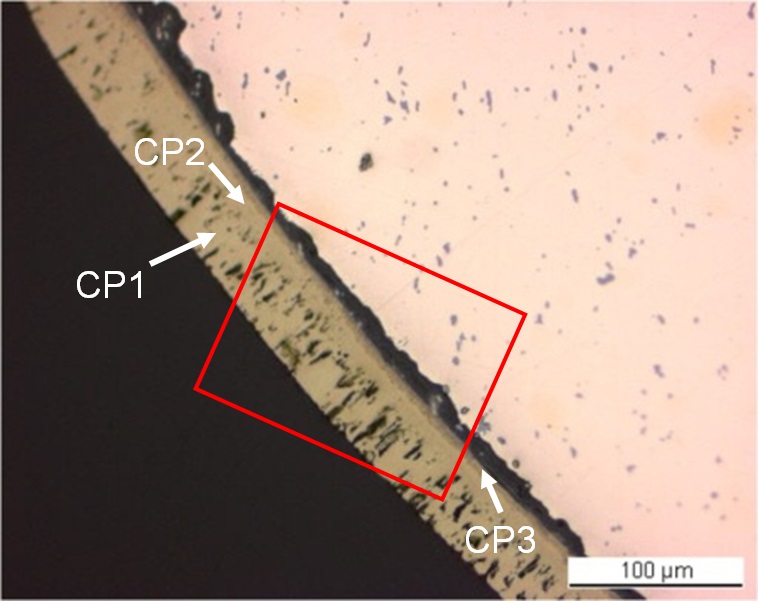 Fig. 16: Micrograph of the metal sample from Fig. 9 (detail) and corresponding to the stratigraphy of Fig. 4, unetched, bright field. The area selected for elemental chemical distribution (Fig. 18) is marked by a red rectangle, 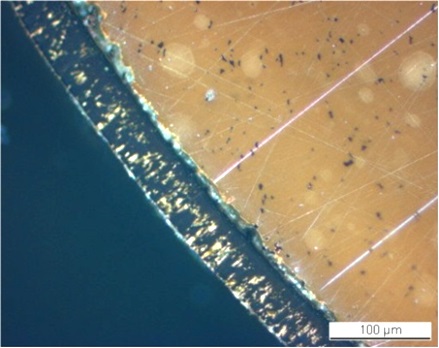 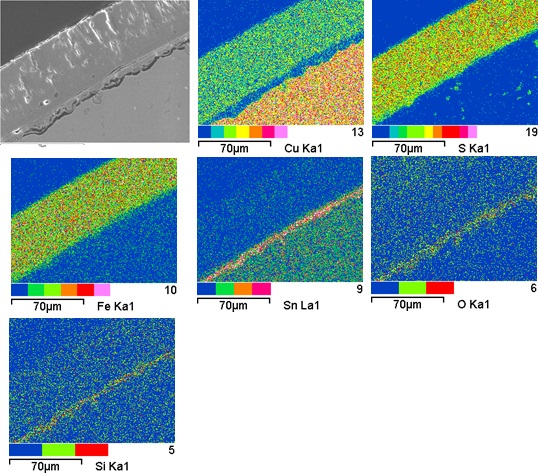 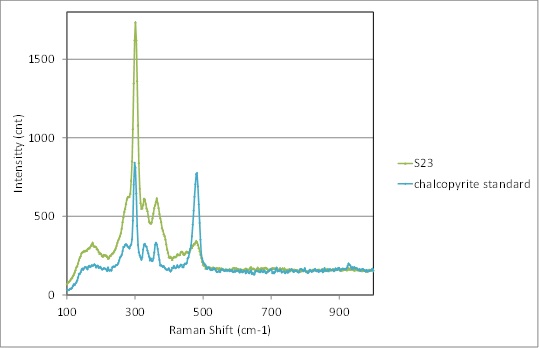 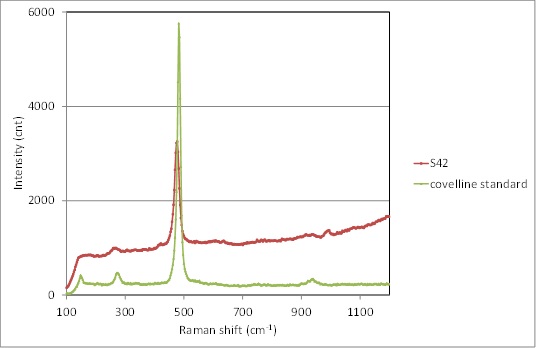 Schweizer (1994) indicates that CP3 shows evidence of pseudomorphic replacement of metal grains by corrosion products that we did not observe.

The stratigraphies observed under binocular and cross-section are rather similar. It is not possible though to distinguish the compact underlayer under CP2 under binocular.

The pin is made from tin bronze and has been annealed after cold working. It is covered with a regular, dense brown-yellow patina typical of lake context (Schweizer 1994). The inner, thin Sn-rich corrosion layer contains soil elements such as Si. The brown-yellow, thick intermediate and outer corrosion layers have the composition of chalcopyrite. This object was certainly abandoned rather quickly in an anaerobic, humid and S and Fe-rich environment, favouring the formation of the above mentioned compound. The limit of the original surface can be located between the chalcopyrite and the Cu depleted but Sn-rich inner corrosion layer. Thus, the corrosion is a type 1 according to Robbiola et al. 1998.