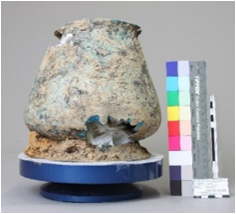 The size and quality of the object makes it likely that is was reserved for important occasions or for ritual use. Secondary use could be a votive offering. Burial condition: inside a 3 meters deep hole in upside-down position. 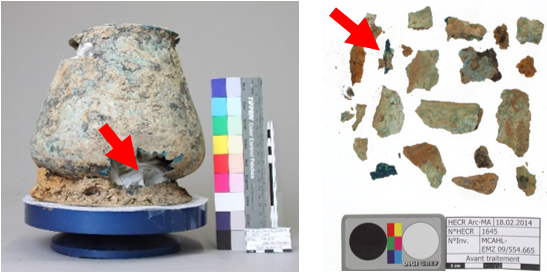 The schematic representation below gives an overview of the corrosion layers encountered on the situla from a first visual macroscopic observation (additional e and i within the coding correspond to strata in contact with the environment (e) and internal strata (i)). 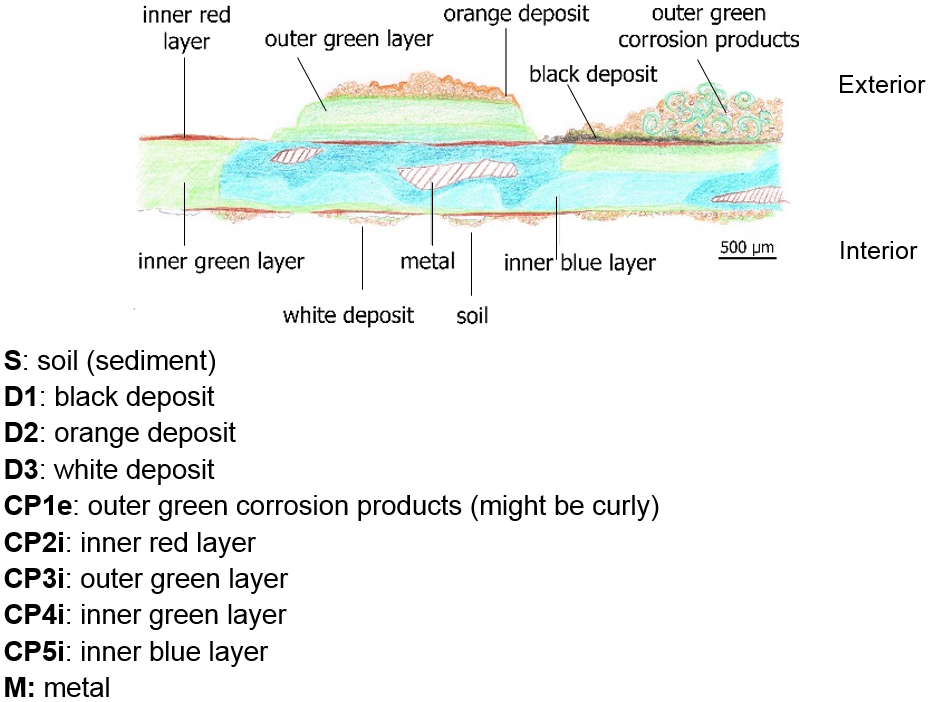 Fig. 3: Stratigraphic representation of the situla by macroscopic observation,

Fig. 4: Micrograph of the cross-section of the sample taken from the detached fragment of the situla showing the location of Figs. 5 to 7, 8 to 11. Unetched, dark field, 50x,

The sample was cut from a detached fragment of the upper part of the main body of the situla in Fig. 2. The cross-section is representative of the entire thickness (0.5 mm) of the object’s body where on the outside there is a thicker accumulation of corrosion including curly malachite (?) clusters (Fig. 3). A metallic core is still present inside the corrosion products layers (Fig. 4).

Cold worked (hammering on a counter-mould), annealed but no final annealing

The remaining metal is a dense tin bronze (Fig. 5, Table 1), showing no inclusion. In bright field, the etched alloy shows a structure principally consisting of polygonal alpha phase grains (Fig. 6). Some of the grains include twin lines (Fig. 7). The presence of strain lines (slip lines) indicates a final cold work without annealing. 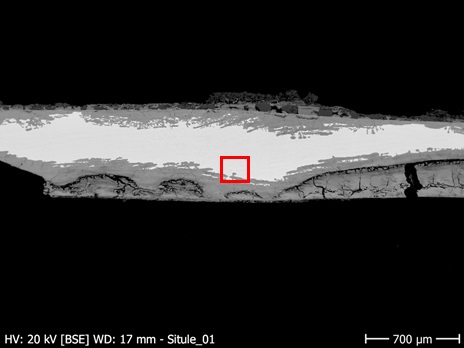 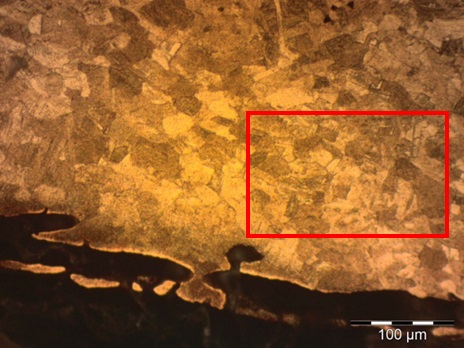 Fig. 6: Micrograph of the metal structure from Fig. 5 (detail), etched, bright field, 50x. The alpha phase of the alloy shows polygonal grains. Area of Fig. 7 is marked by a red rectangle, 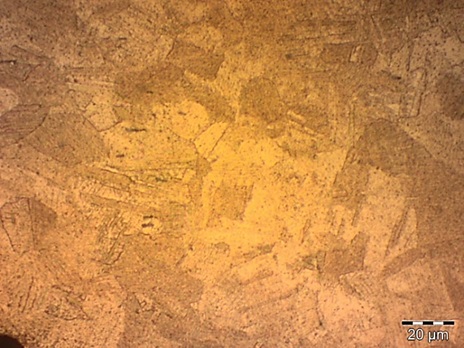 Fig. 7: Micrograph of the selected area of Fig. 6, etched, bright field, 500x. The grains show both twin and strain lines,

The corrosion crust is heterogeneous and has in places completely replaced the metal. The metal – corrosion products interface is irregular due to transgranular corrosion (Figs 5-6). In most cases, the corrosion crust can be divided in three main layers: first, an inner compact blue layer directly on the metal core (CP5, Figs. 8, 10 and 15 and CP3, Fig. 14). In areas of extensive corrosion this blue layer coexists with a friable light blue-green layer (CP4, Figs. 8, 10 and 15 and CP2, Fig. 14). Secondly, and depending on the area, either a very fine dark green (CP3, Figs. 8 and 15) or red corrosion layer (CP2, Figs. 10 and 15) marks the limit of the original surface. Finally, there is a fourth outer layer, consisting of friable and sometimes curly pale green corrosion products, interspersed with soil products (CP1, Figs. 8, 10 and 15). In heavily worked and fragile parts of the object a cleavage between the inner layers of blue and light blue-green corrosion is present, rendering the light blue-green corrosion vulnerable to loss (Fig. 9).

The inner layers (CP3-CP5) are Sn and O-rich and depleted in Cu (Table 2). The outer layers (CP1 and CP2) are Cu and O-rich, contain no Sn, and are contaminated with Ca, Si, Al and Fe coming from the soil (Fig. 11). The colour of the corrosion crust varies according to the content of Sn (the more Sn, the darker green or blue the corrosion). FTIR on the inner blue (CP5 and Fig. 12) and outer green (CP1 and Fig. 13) layers were difficult to interpret. Only malachite could be identified in both cases. XRD spectra could not be interpreted because of the deficiency of peaks.

The limit of the original surface is well defined (interface of CP1 and CP2) but due to the fragility of the inner corrosion layers it was difficult to uncover. 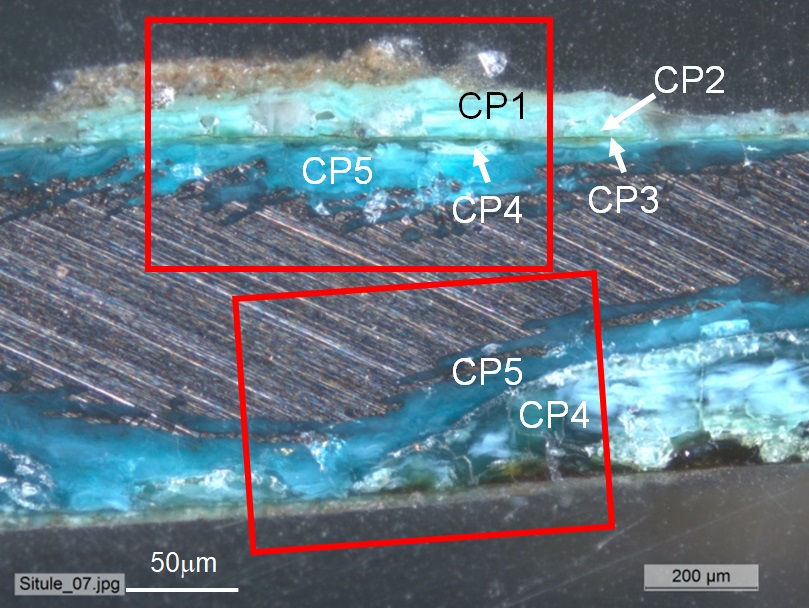 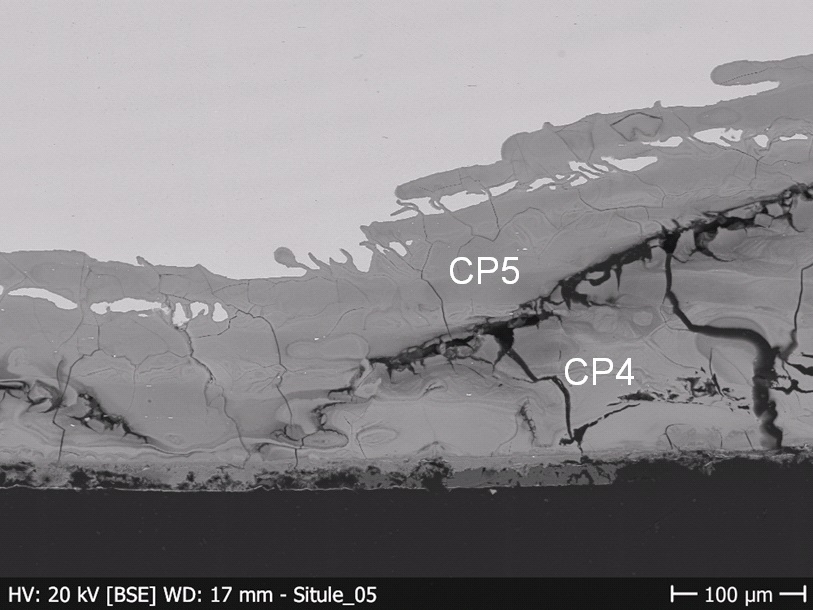 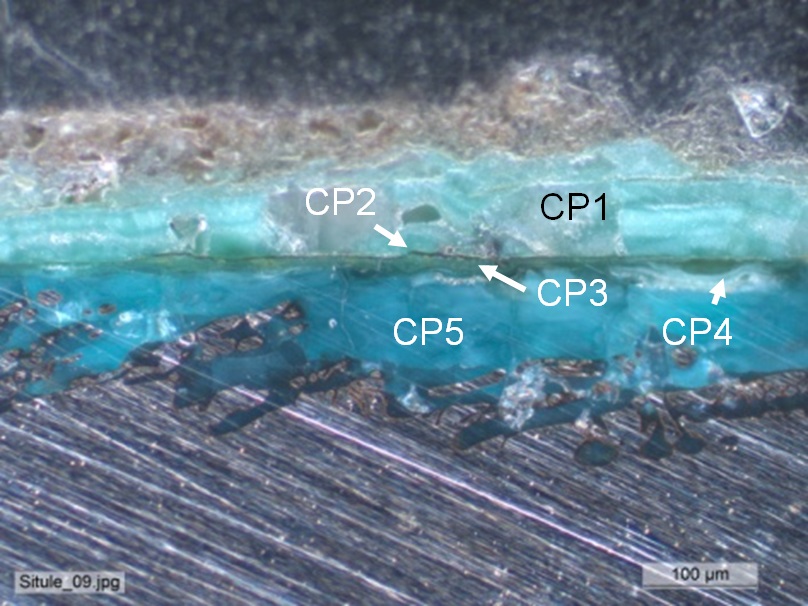 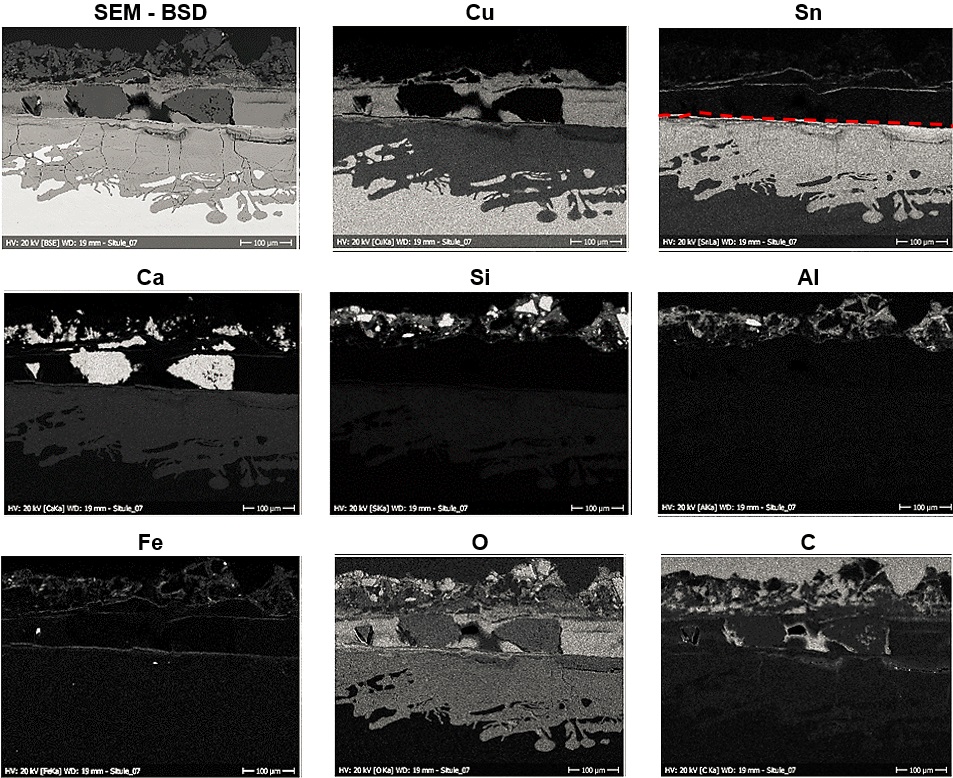 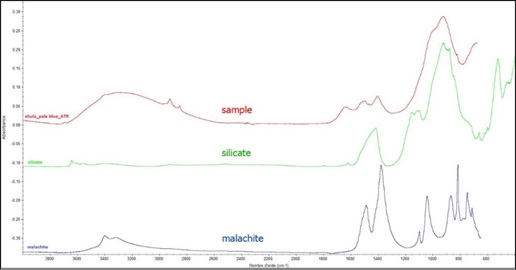 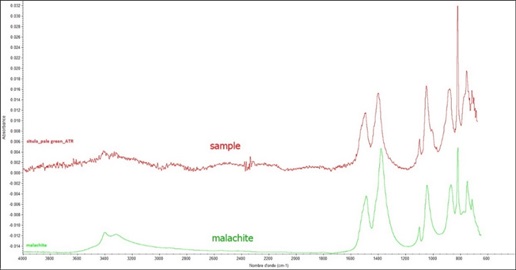 Fig. 14: Stratigraphic representation of the sample taken from the detached fragment of the situla in cross-section (dark field) using the MiCorr application. The characteristics of the strata are only accessible by clicking on the drawing that redirects you to the search tool by stratigraphy representation. This representation shows the interior face and can be compared to Fig. 8 (bottom red rectangle), Credit HE-Arc CR, M-J.Scholl.

Fig. 15: Stratigraphic representation of the sample taken from the detached fragment of the situla in cross-section (dark field) using the MiCorr application. The characteristics of the strata are only accessible by clicking on the drawing that redirects you to the search tool by stratigraphy representation. This representation shows the exterior face and can be compared to Fig. 8 (top red rectangle), Credit HE-Arc CR, M-J.Scholl.
Synthesis of the binocular / cross-section examination of the corrosion structure

The schematic representation of corrosion layers of Fig. 3 integrating additional information (e and i within the coding correspond to strata in contact with the environment (e) and internal strata (i)) based on the analyses carried out is given in Fig. 16. 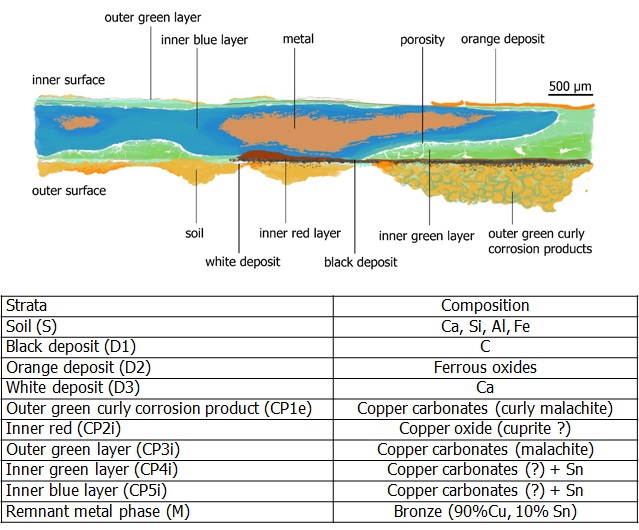 Fig. 16: Improved stratigraphic representation of the situla from visual observations and analyses,

The metal structure of this low-tin bronze shows extensive cold work and multiple annealing cycles with a final cold work. The total absence of inclusions highlights a highly developed knowledge in bronze metallurgy. The metal is much corroded. Transgranular corrosion is visible. The majority of the internal corrosion products are composed of copper carbonates that have replaced much of the metal. Curly malachite has developed in clusters on the outside of the surface. This pattern is characteristic of a long-term burial period. The presence of inner enriched Sn layers shows a decuprification phenomenon (dissolution of Cu). Because of the friable nature of the inner blue-green layer that supports the limit of the original surface, as well as its cleavage with the blue layer underneath, the original surface has become very fragile. The corrosion is thought to be of type 1 according to Robbiola et al. 1998.