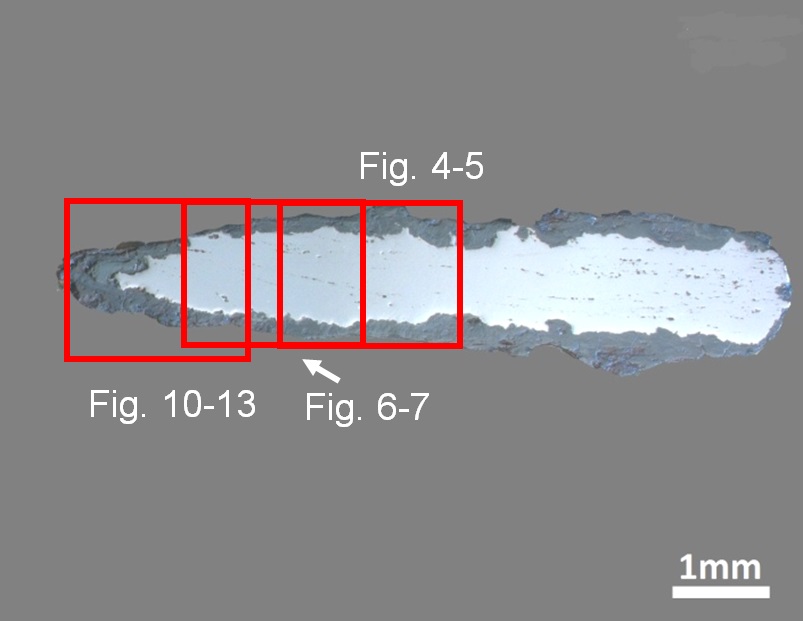 Fig. 3: Micrograph of the cross-section of a cut through the tip of the knife showing the location of Figs. 4 to 7 and 10 to 13,

The remaining metal consists of two forged wrought iron bars, one of which includes a carburized tip (M1, Table 1). They are separated by a welding seam (M2, Figs. 8 and 9). The ferritic part (M3) is Cu-rich, whereas the carburized tip has a low and medium content of trace elements (Table 1). The metal contains elongated slag inclusions (Fig. 4) showing a structure of wüstite (FeO) in a glassy matrix (Fig. 5 and Table 2). Most of the slag inclusions are arranged in rows, marking the welding seam (Figs. 4 and 8) and following the forging direction. Their chemical composition differs in the Mn content (Table 2): the latter is higher in the slag inclusions of the carburized tip. The high P content of the slag in the ferritic part must be noted since the metal in general has a medium P content (Tables 1 and 2). Etching with Oberhoffer’s reagent solution makes the P distribution visible (Fig. 9). Dark areas are depleted of P whereas P-rich zones, such as those found in the welding seam, appear in white. After nital etching, the very fine steel microstructure of the tip shows the transition from hypoeutectoid to eutectoid steel (ferrite component in white and pearlite component in black, partly bainite, Figs. 6, 7 and 8). The body of the knife is made of wrought iron with an annealed, irregular ferritic structure (Figs. 6 and 7). The average hardness of the wrought iron (HV1 130) is a little higher than expected, whereas the hardness of steel in the hypoeutectoid-eutectoid tip (HV1 360) is an indication of quench-hardening followed by tempering.

Table 2: Chemical composition of the slag inclusions (mass%, <: below the detection limit) at the tip (pearlite) and the body (ferrite) of the knife. Method of analysis: SEM/EDS, Laboratory of Analytical Chemistry, Empa. 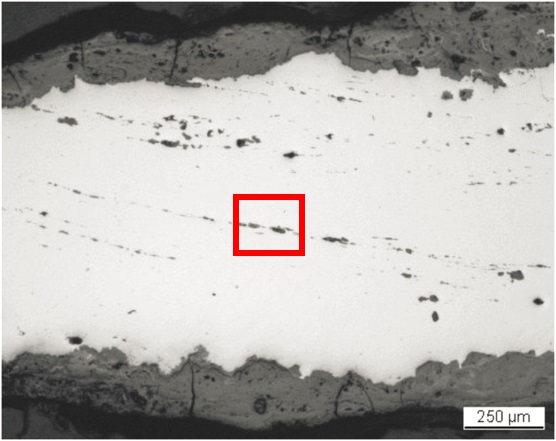 Fig. 4: Micrograph of the metal sample from Fig. 3 (detail), unetched, bright field. In white the metal, in light-grey the slag inclusions and the corrosion layer. The micrograph of Fig. 5 is marked by a rectangle, 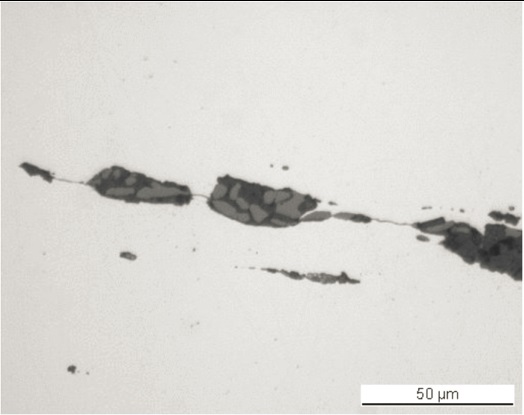 Fig. 5: Micrograph (detail of Fig. 4), unetched, bright field. The slag inclusions have a structure of wüstite dendrites (light-grey) in a glassy matrix (dark-grey), 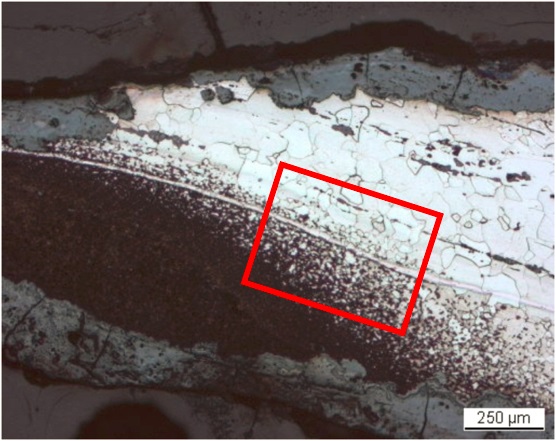 Fig. 6: Micrograph of the metal sample from Fig. 3 (detail), nital etched, bright field. In white we observe the ferrite, in black or dark-grey the pearlite and bainite. The micrograph of Fig. 7 is marked by a rectangle, 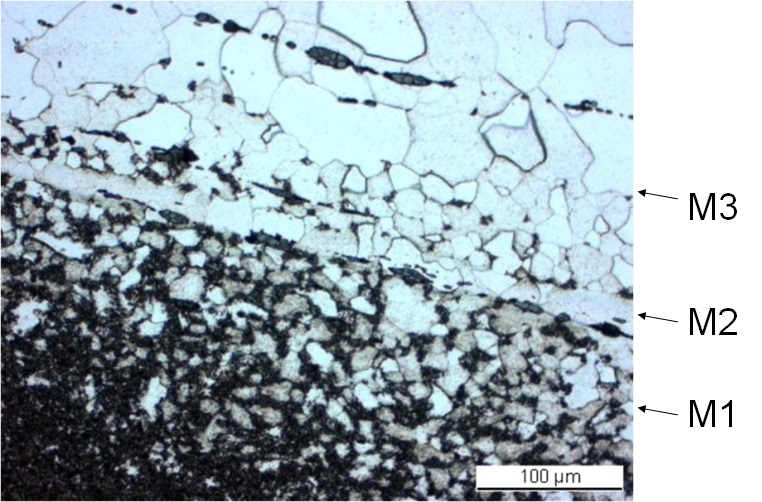 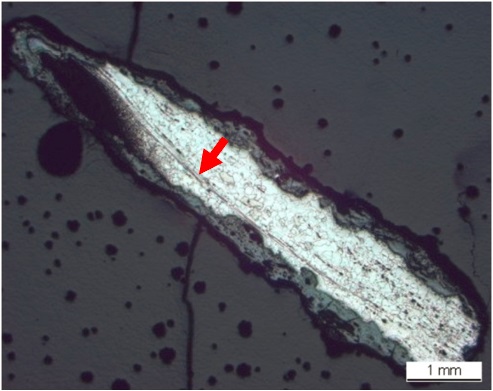 Fig. 8: Micrograph of the metal sample from Fig. 3 (rotated by 45°), nital etched, bright field. In white we observe the ferrite, in black or dark-grey the pearlite. The red arrow shows the welding seam,

Fig. 9. Micrograph of the metal sample from Fig. 3, etched with Oberhoffer’s reagent. The welding seam appears in white (red arrow),

The metal - corrosion products interface is irregular (Figs. 3, 4 and 10) and the average thickness of the corrosion crust is 200µm. In bright field, the corrosion appears grey, rather heterogeneous and heavily cracked. A thin light-grey layer (indicated by an arrow in Fig. 10) can be detected. Under polarised light the corrosion is more clearly stratified, the thin layer mentioned before is black (CP3) and surrounded by dark-brown (CP2) and orange-red (CP1) corrosion layers (Figs. 11 and 12). It contains less O (magnetite or hematite?) than the orange-brown corrosion products (iron hydroxides?) (Table 3 and Fig. 13). The outer corrosion layer (covering the aforementioned thin black layer) contains external markers such as quartz grains and other rock fragments (Ca, Fig. 13). The shape of the blade is preserved in the corrosion crust (Fig. 13, arrows on the SEM image). The absence of P, an external marker, highlights where the limit of the original surface was located (interface CP1 / CP2).

Table 3: Chemical composition (mass %, <: below the detection limit) of the corrosion layer (from Fig. 12). Method of analysis: SEM/EDS, Laboratory of Analytical Chemistry, Empa. 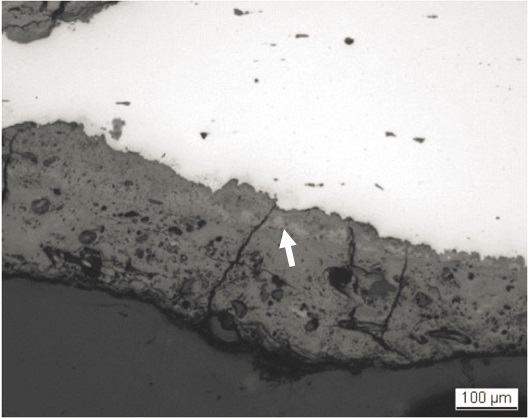 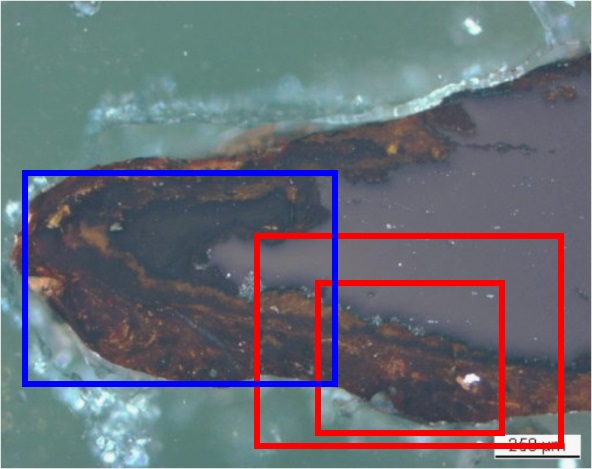 Fig. 11: Micrograph showing the metal - corrosion crust interface from Fig. 3 (detail) unetched, polarised light. The micrographs of Fig. 10 and Fig. 12 are marked by the large and small red rectangles respectively while the area selected for elemental chemical distribution (Fig. 13) is marked by the blue rectangle. The light-grey layer of Fig. 10 (arrow) appears black whereas the rest of the corrosion layer is brown, red and orange, 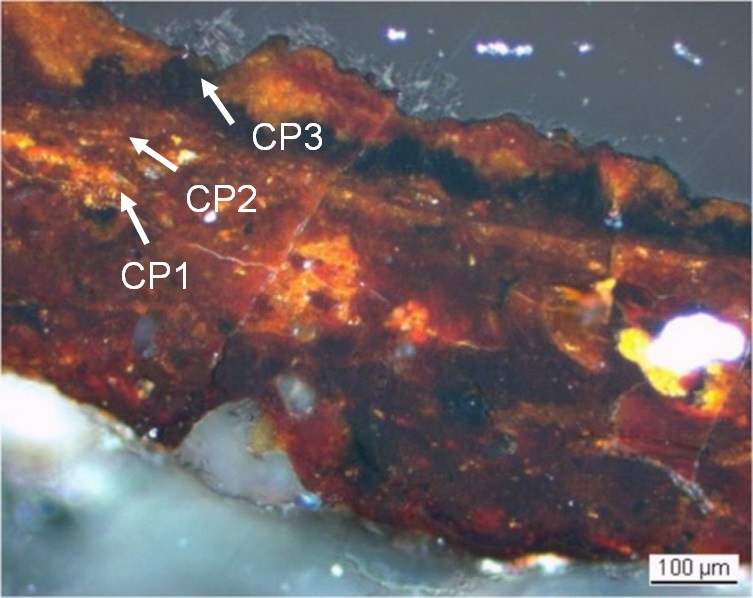 Fig. 12: Micrograph (detail from Fig. 11) corresponding to the stratigraphy of Fig. 14, unetched, polarised light. The black corrosion layer next to the metal surface corresponds to the light-grey layer indicated with an arrow on Fig. 10, 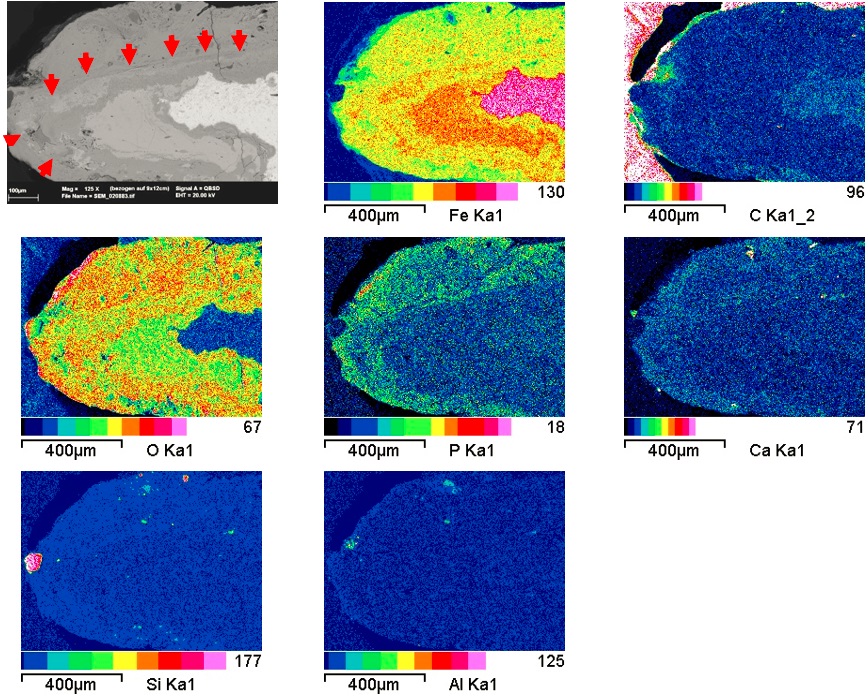 Fig. 14: Stratigraphic representation of the tip of the knife in cross-section (dark field) using the MiCorr application. The characteristics of the strata are only accessible by clicking on the drawing that redirects you to the search tool by stratigraphy representation. This representation can be compared to Fig. 7 and Fig. 12, Credit HE-Arc CR.
Synthesis of the binocular / cross-section examination of the corrosion structure

The knife is forged from two wrought iron bars which have been welded together. The tip is carburized. The recrystallized structure of the ferrite is probably the consequence of tempering the tip. The metal compositions of both alloys differ from the one worked in the forges of Develier-Courtételle (Eschenlohr et al. 2007, 71). For this reason this well worked knife is identified as an importation to the early medieval village Develier-Courtételle. The limit of the original surface (limitos) is still preserved in part of the corrosion layers still in place. Chemically it can be located at the interface of the P-rich outer corrosion layer and the P-poor inner corrosion products. Visually it can be located by the presence of sediments in the outer corrosion layers and most likely by the hardness and coloration of the inner corrosion products (magnetite?). It is an example of a terrestrial corrosion crust.