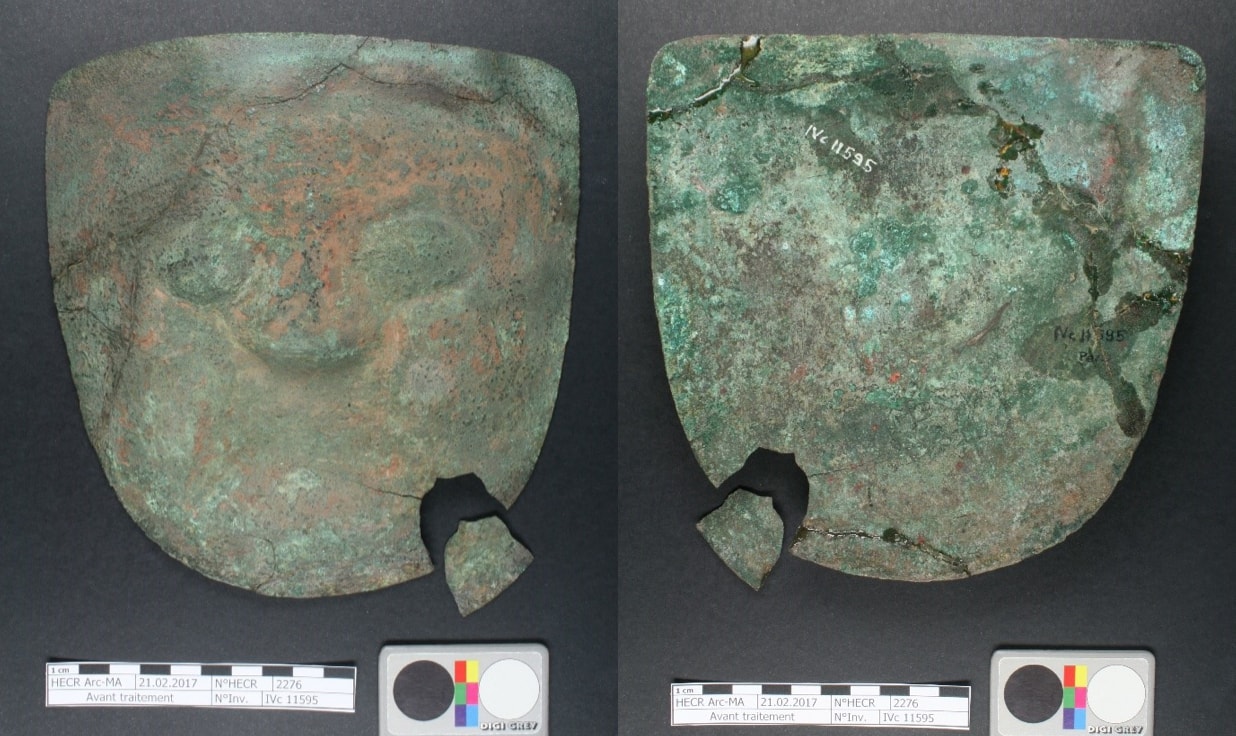 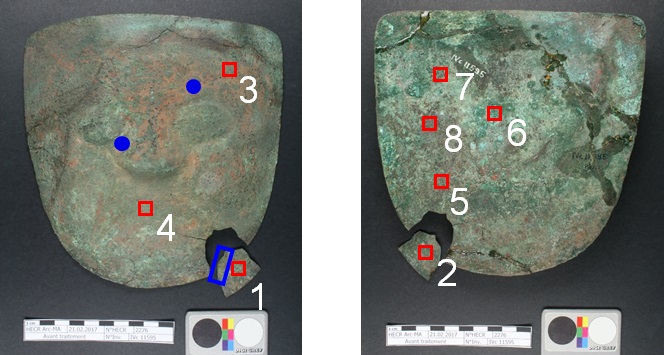 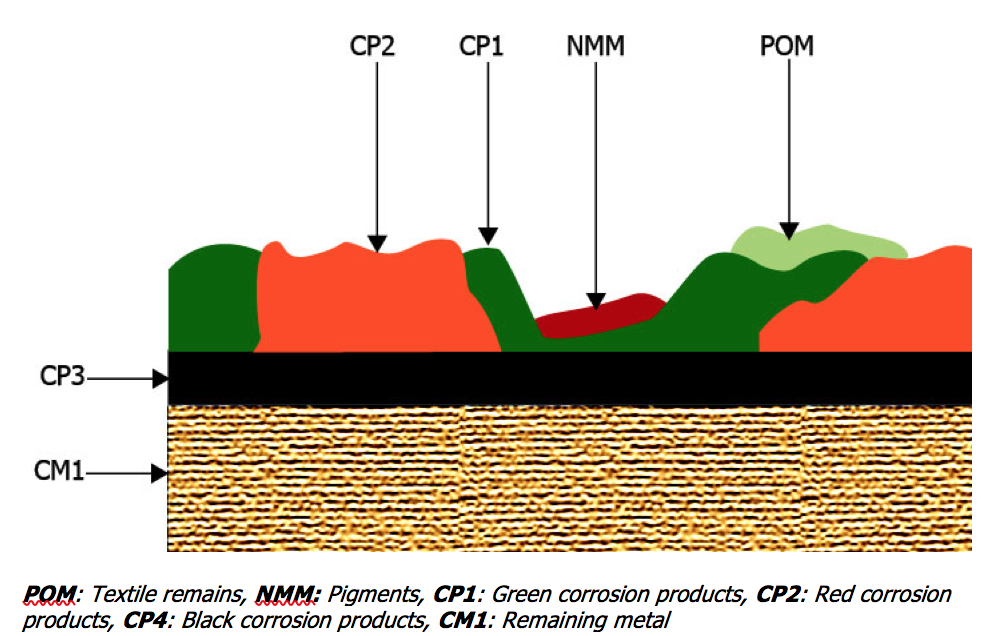 Fig. 3a: Stratigraphic representation of the front face of the funeral mask in cross-section by macroscopic observation, 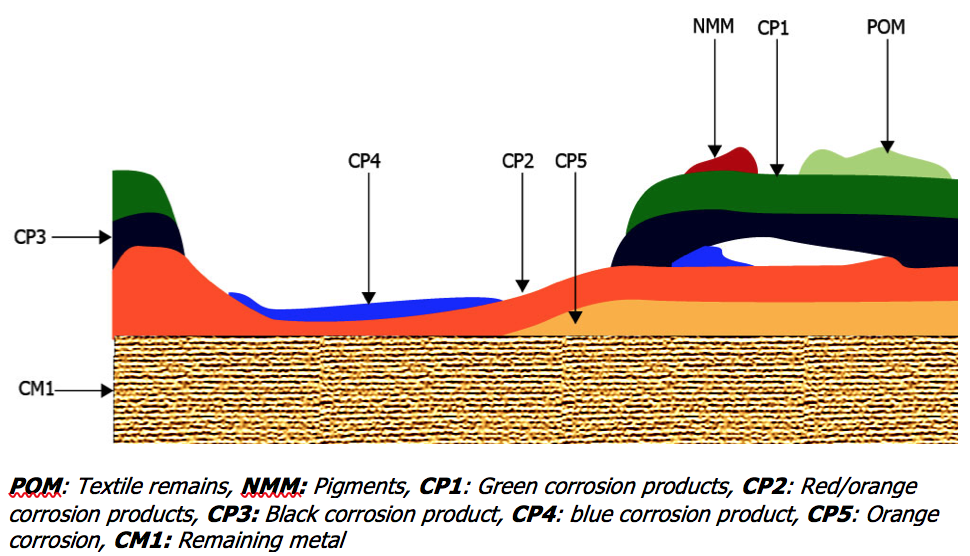 Fig. 3b: Stratigraphic representation of the back face of the funeral mask in cross-section by macroscopic observation, 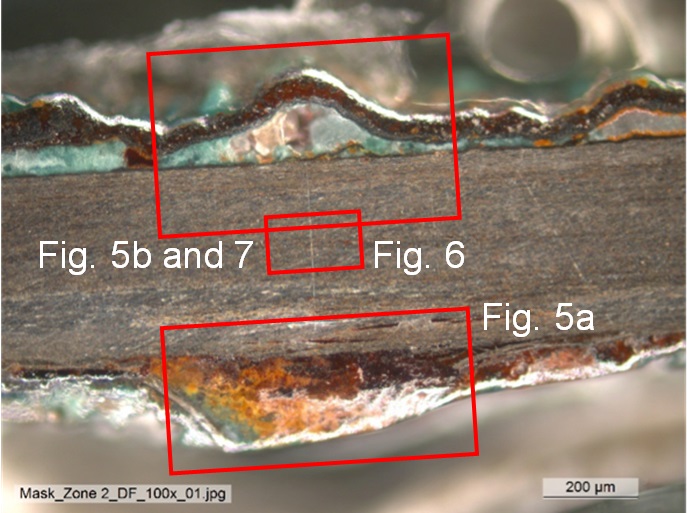 Fig. 5a: Stratigraphic representation of the cross-section from Figs. 3a or 4 (front of the object) using the MiCorr application. The characteristics of the strata are only accessible by clicking on the drawing that redirects you to the search tool by stratigraphy representation, credit MiCorr_HE-Arc CR, N. Gutknecht.

Fig. 5b: Stratigraphic representation of the cross-section from Figs. 3b and 4 (back of the object) using the MiCorr application. CP2 is CP3 while CP3 is CP2 and CP3 is CP4 in Fig. 3b. The characteristics of the strata are only accessible by clicking on the drawing that redirects you to the search tool by stratigraphy representation, credit MiCorr_HE-Arc CR, N. Gutknecht.

A polished section was made from an already detached fragment that was temporarily embedded in resin (Fig. 2). On Fig. 4 the upper part of the sample corresponds to the front face of the funeral mask while the lower part corresponds to its back face. Both sides have developed subsequent layers of corrosion. In areas, these have buckled and become detached.

The metal is a copper-silver alloy with traces of Pb and As. The surface has been decuprified according to the tumbaga making process (Scott 2000 and McEwan 2000). This pre-Columbian surface enriching technique results in a silver looking object, even though the general silver content is low (about 30%). The metalsmith would repeatedly hammer and anneal the metal, which would create a copper oxide scale on the surface. The latter was then dissolved in acidic plant juices (Scott 2000). This process was repeated until the surface was enriched with silver, giving it the appearance of a silver artefact.
It is impossible to know the original alloy composition, as the proportions have changed through corrosion and migration of elements. Nevertheless, the inner metal is reddish, which could indicate a 30% silver content for 70% copper. The silver-rich surface has been further enriched by the migration of copper ions that have formed the thick corrosion crust on top of the original surface.
The XRF analysis is a surface analysis that was done without any removal of the copper corrosion products. The proportions are given for the oxide on the surface. The SEM/EDS analysis shows that there are Cu-rich phases alternating with Ag-rich phases. There are inclusions of Pb and As (Fig. 6). Cl has been detected throughout the entire corroded metal, most likely in the form of Cu and Ag corrosion products.
A layer of mercury can be seen with EDS (Figs. 7 and 8). Mercury was not used by the pre-Columbians in metallic form (Scott 2000 and McEwan 2000) but was common as a pigment in form of mercury sulfide (cinnabar). 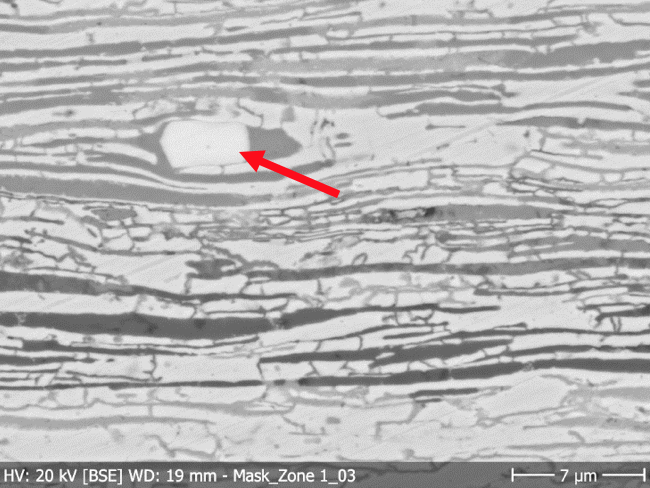 Fig. 6: SEM image (BSE-mode) of the metal sample from Fig. 4 (detail), the elongated grains are the result of repeated hammering. Absence of strain lines indicates that the metal is annealed. The darker areas are Cu-rich phases and the lighter areas are Ag-rich phases. The arrow shows an As- and Pb inclusion, 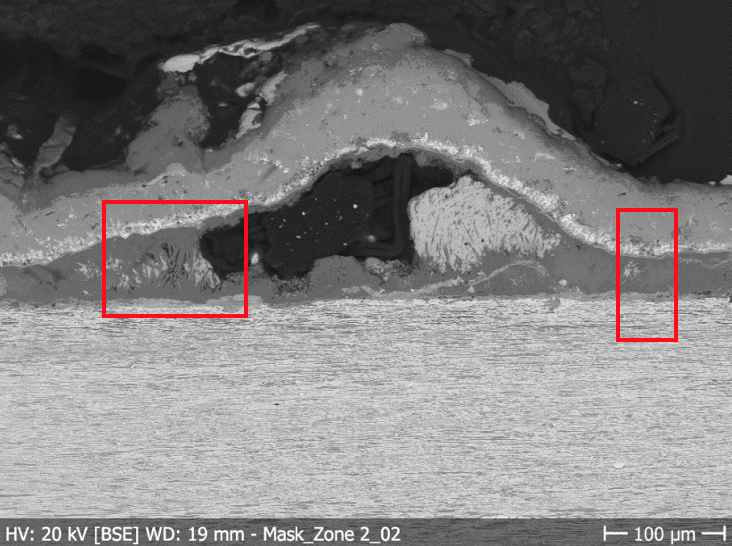 Fig. 7: SEM image (BSE-mode) of the metal sample from Fig. 4 with detail (Fig. 8) indicated by the left red rectangle. The selected area for elemental chemical distribution (Fig. 9) is marked by the right red rectangle, 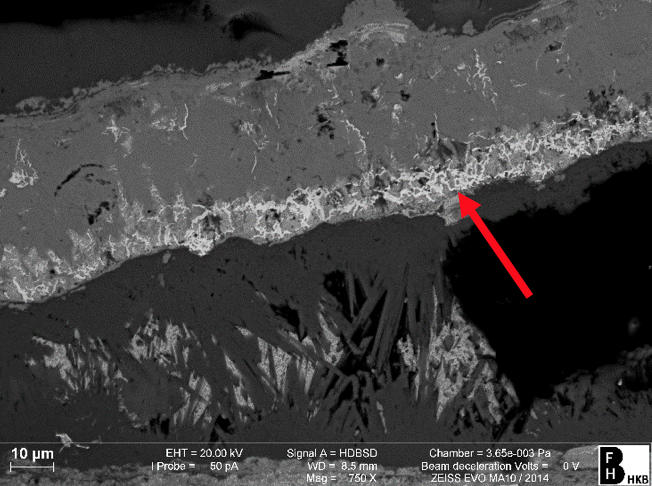 The remaining metal shows a preferential corrosion of copper and a presence of chlorides (Fig. 9, Table 1). There is a preferential corrosion of copper that has fragilized the structure of the sheet metal.
The silver enriched surface is entirely covered with copper corrosion products. The outer green layer (CP1) is a copper carbonate (Fig. 12, Table 1), while the red layers (CP2 in Fig. 5a ; CP4 and CP5 in Fig. 5b) are consisting of a copper oxide, most likely cuprite (Fig. 10). Below the cuprite and above the silver enriched surface on the front face a thin black layer is present (appears grey under polarized light). SEM-EDS analysis shows that in that stratum the mercury of the pigment (Fig. 14) has been transformed into a mercury-silver compound (Figs. 8 and 11a and b) which according to Raman spectrometry (Fig. 15) is not cinnabar anymore. In areas this silver- and mercury-rich surface has been pulled off by raising the corrosion layers, leaving structural voids that were subsequently filled by secondary corrosion products, most likely copper carbonates (Figs. 7 and 8).
The silver sulphide (HgS, cinnabar, Fig. 14), present as a red pigment on the silver surface, could have been reduced through an electrochemical process in the presence of chlorides (Keune 2005). The released sulfur recombined with the silver to form black silver sulphide. Above that layer a porous mercury- and silver rich stratum has formed (see Hg & Ag on cartography Fig. 9). It remains unclear if the limitos is located in the silver enriched surface or within this silver-mercury compound (Fig. 8). 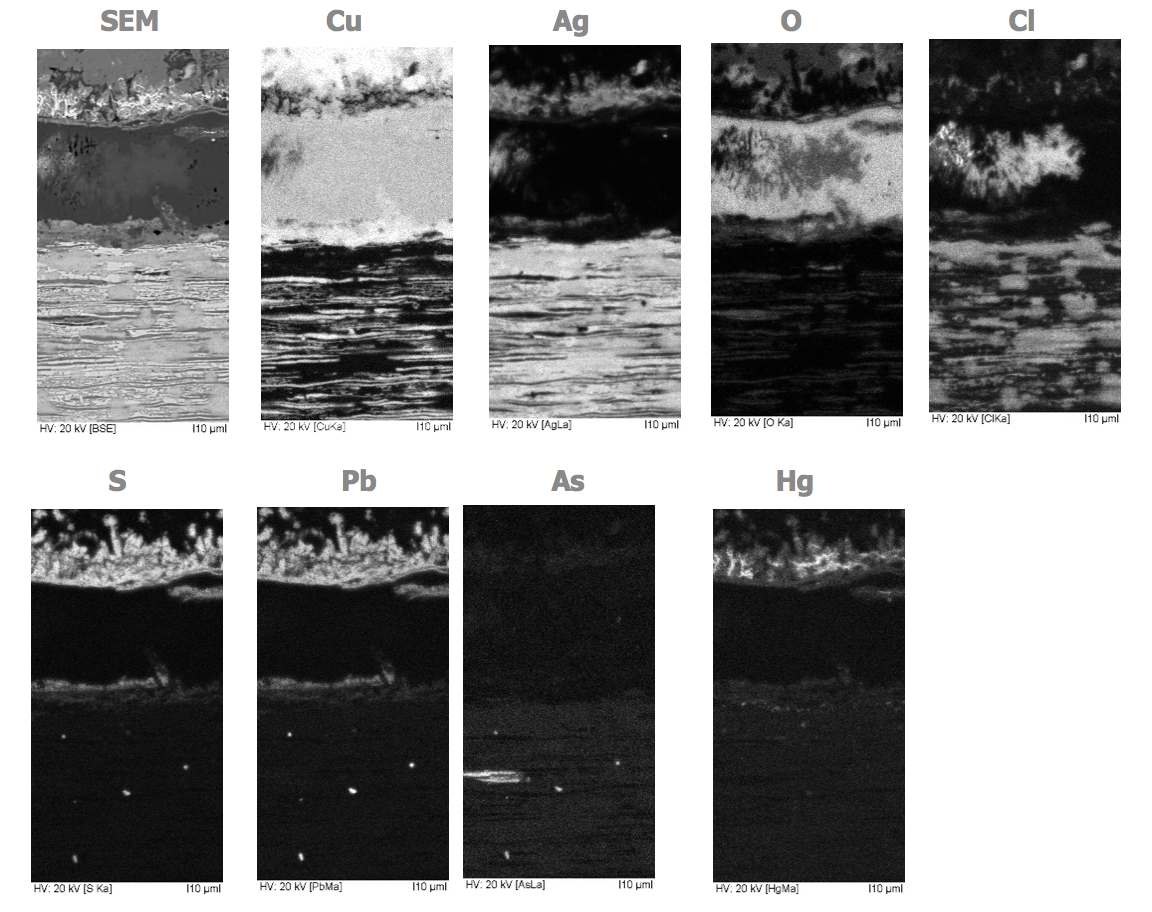 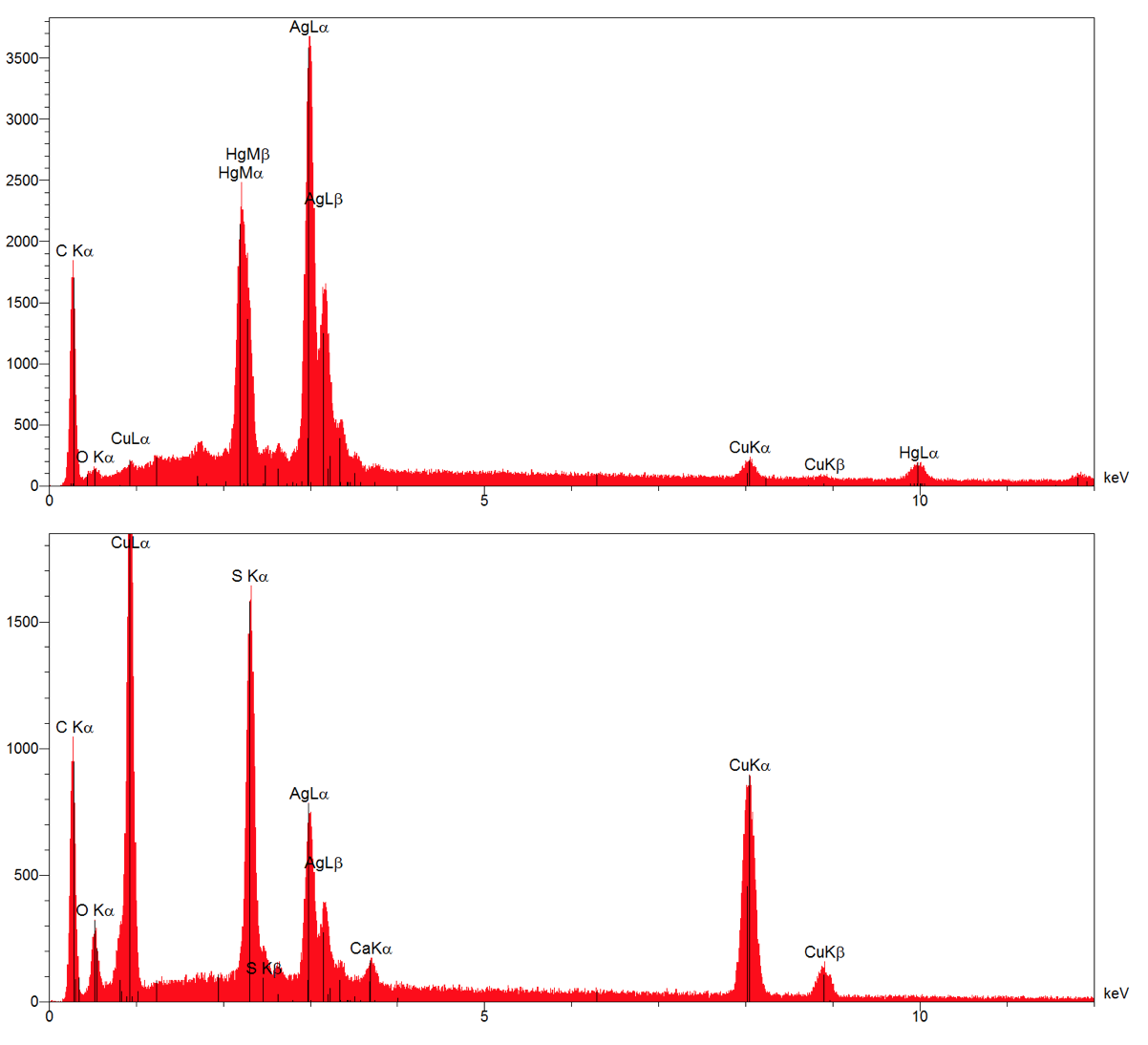 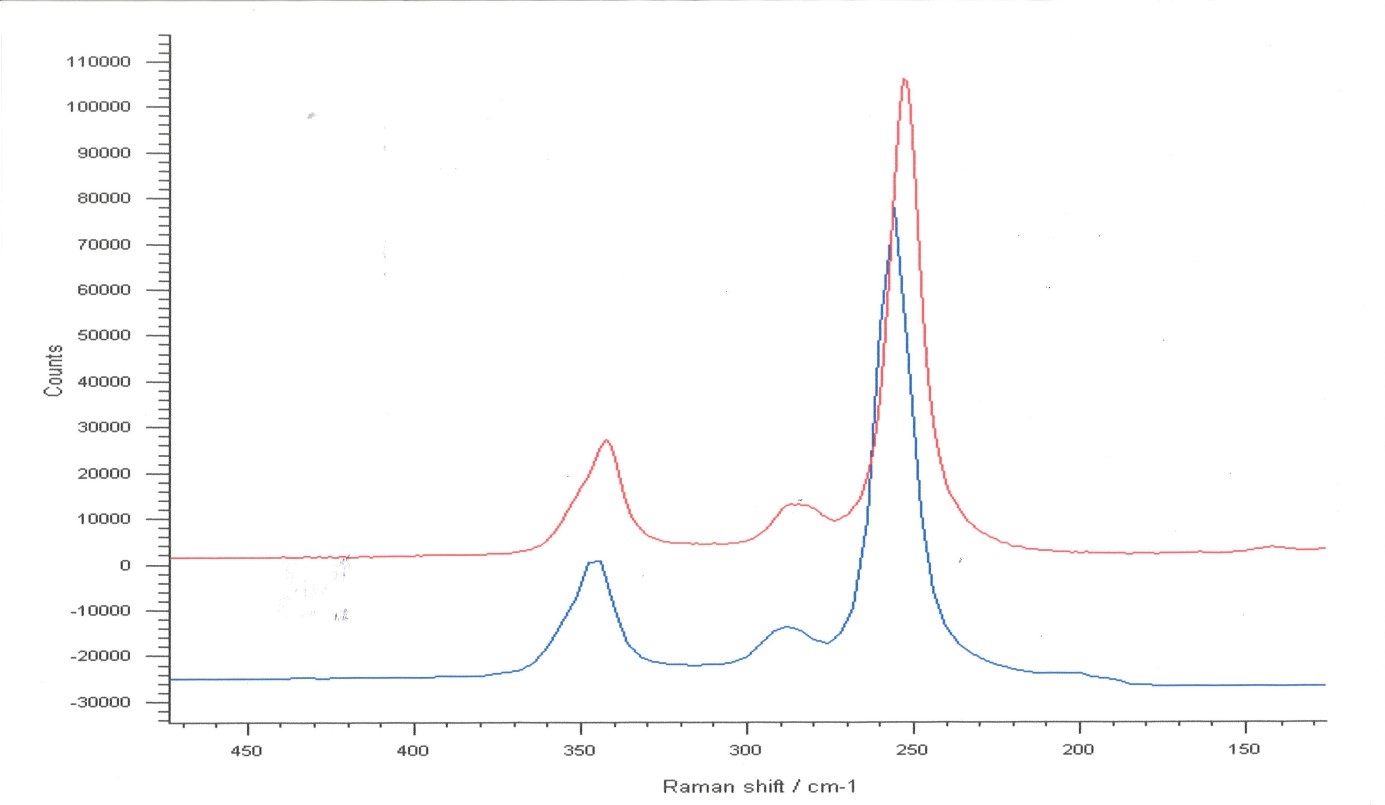 The schematic representation of corrosion layers of Fig. 7 integrating additional information based on the analyses carried out is given in Fig. 16. 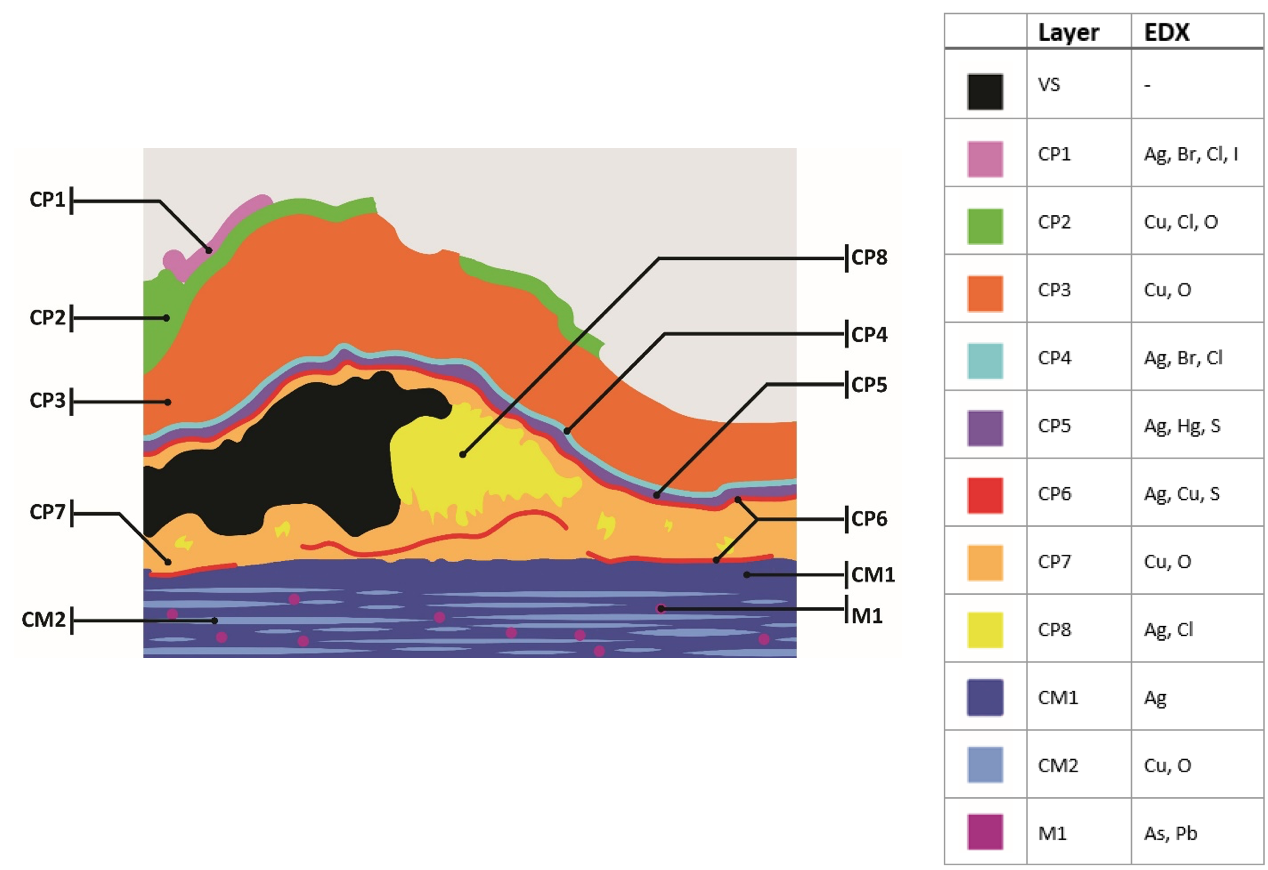 Fig. 16: Improved stratigraphic representation of the funeral mask (Fig. 7) based on the results from the SEM-EDS analyses,